Edit
watch 02:58
No Man's Sky Update - The Loop
Do you like this video?
Play Sound
For similarly named pages, see Gridlock (Disambig).

"I'm stoked. Let's give these incursions a go."
— Gridlock

When the Chimera Parasite resurfaced, REACT knew they needed operators on the ground who are self-sufficient and autonomous. Gridlock's expertise in mechanical systems and robotics from her days with the SASR make her a fitting addition to the REACT roster. Her TRAX Stinger anti-personnel traps can damage and slow any hostiles they encounter.

Speculating on team dynamics effect: Fairous's equanimity (QUERY: down to earth) at the emergence of the Chimera may be beneficial if it were to spread to the team. Probability High.

A medium armored Operator, Gridlock is initially equipped with three Trax Stingers. When deployed, these devices will unfold and spread in its proximity. They slow down enemies that rush across them - Trax Stingers also damage opponents and is, thus, an excellent tool to hold an area as well as soften up enemies for your weapons.

Sufficiently heavy enemies (generally Smashers) will destroy Trax patches by walking on them - Rooters may potentially destroy patches with their ranged attack, Tormentors may destroy them while moving in Sprawl form, and Apexes and Tormentors may accidentally catch them in their explosive attacks. 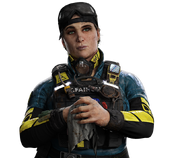 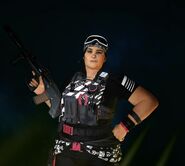