Edit
watch 02:59
Metroid Dread - The Loop
Do you like this video?
Play Sound
For other characters who share the same call sign, see Six
For the Rainbow Operator, see Harry.

"Six. She left some very large shoes to fill, didn't she? I'll tell you what. For now, please call me Harry."
— Harry

Dr. Harishva "Harry" Pandey (Hindi: हरिश्व पाण्डेय), codenamed Six, is the current head of Rainbow after the departure of his predecessor, Aurelia Arnot.[1]

Hailing from India, Harry was known to have married and had a son at some point. Following the reactivation of Rainbow in 2015, Harry acted as Aurelia's psychological and military culture advisor. His primary function was to aid in the screening and selection of candidates, ensuring they meshed well with the team as a whole. In 2019, Aurelia accepted the position as the US Secretary of State. With her recommendation, and based on his familiarity with the members of Rainbow, Harry accepted the role of "Six".[2]

Intimidated by his new role as Six, Harry did not feel it appropriate that the Operators refer to him by his new codename. Instead he repeatedly told them to "call me Harry". Harry sought to improve the synergies of each Operator and began to perform psych evaluations on every Operator to gain a better understanding of them. Additionally, he made Maria Alvarez the acting Director of Rainbow's R&D division in order for her to make improvements on all Operator equipment. Harry conceived The Program as a result of the continued global threat of terrorists. It was Harry's belief that if Operators had a place to live and train together, they would have a better understanding of one another and became stronger teammates as a result. Harry later found an abandoned Stadium in Elis, Greece and had it renovated to serve this purpose. To ensure the safety of each Operator, Harry had Mira develop the SIM-SUIT so that simulated rounds could provide realistic feedback akin to real ammunition.

Harry later invited Jaimini Shah, and by extension, NIGHTHAVEN to join Rainbow. Officially, this was done in response to NIGHTHAVEN answering a distress call on the super tanker Argus. Despite this, Harry secretly wanted to prevent an opposing organization from hiring NIGHTHAVEN and to keep a close eye on them. In January 2020, Harry launched the first annual Tournament of Champions at the Stadium. Under the guise of a public training exercise for CTUs across the globe, the tournament served as an annual test of everything the Operators had learned since The Program had started.

In August 2020, Harry established the Rainbow Operation Staff which sought to recruit instructors that were specialized in several areas of expertise. Sam Fisher was recruited as the first instructor. On October 31st, 2020, Harry traveled to Bangkok to attend the Loi Krathong festival. He was later contacted by Elena Álvarez who informed him that Jaimini Shah was also in Bangkok and that she was "recruiting a new expert" to join NIGHTHAVEN.

Harry as seen in the NIGHTHAVEN trailer

Harry in the Y5 S1 photo 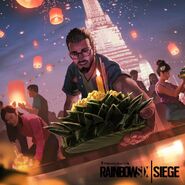