"I used to feel so much peace, staring into the heavens… until a piece of it fell and the nightmare began. We thought it could be contained, but it evolved, so we did too. If there's a way to stop them, you will find it… but I know, you will find me first."
— Hibana (Rainbow Six Extraction: Cinematic Reveal Trailer)

After the outbreak of the Chimera Parasite in 2018, Imagawa interviewed Rainbow specialists who participated in Operation Outbreak and retrieved post-operation reports on multiple occasions. She conceived a daughter with longtime boyfriend and fellow Rainbow specialist Jack "Pulse" Estrada and named her Maho. Her newfound family made her fearful of the reemergence of the Parasite.

When it did reemerge across the United States a few years later, she and Estrada were one of the first Rainbow specialists approached to join the newly formed REACT. This was due to her extensive counter-terrorism background which left her with a broad and varied set of tactical skills that would make her particularly deadly against the Archæans. They were hesitant to join, however, due to the thought of being away from Maho for extended periods of time. This changed when they were given approval to bring Maho aboard REACT's mobile command ship, the PIONEER.

To mitigate separation anxiety, REACT psychologists enacted a pilot project to accommodate family units aboard the PIONEER. This along with Imagawa's efforts to be closer to her daughter resulted in the creation of a daycare aboard the vessel. At the request of REACT psychologists, she and Estrada have regular extended visits with Maho while not on missions. At an unspecified point, she became MIA during an Incursion and was held captive in an Archæan Tree. Despite resistance from the Parasite, she was later rescued by Sanaa "Nomad" El Maktoub, Olivier "Lion" Flament, and Elżbieta "Ela" Bosak. 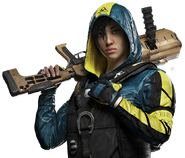