"Playing on themes of familiarity and vulnerability, this encounter takes place in a typical suburban home. It’s a prime example of destructive depth and replayability, and is one of the showcases for classic siege gameplay."
— Ubisoft Description

House is a map featured in Tom Clancy's Rainbow Six Siege. It was first shown during the reveal of the game at E3 2014. The map was reworked in the Operation Steel Wave expansion.

The reworked version of the map has undergone several drastic changes. Additionally, the map is only available in the Quick Match playlist.

With this rework, not only have some of the existing areas been made bigger. An entirely new section on the South side has been added, with two rooms on each floor and a staircase to connect them. With this new space, players have more space to move and breathe. The additional space also introduces a new Bomb site in TV Room and Music Room.

The Garage has been revamped, with only one of its doors being destructible and a new barricade being added to give a different access option, while still making a Defuser plant harder. Secondly, what was once Workshop is now a finished Girls’ Room with an attached walk-in closet. Thirdly, lines of sight have been reduced on the North side of the building, with the main door being blocked off and the shuttered window replaced with a hallway.

The Living & Training Bomb site has been removed in favor of Master Bedroom & Boys’ Room. Most floors are now breakable, making vertical play more viable. Some hatches have been added or moved.

A Potential Location for the Bio Container and one of the Bombs. The other Bomb is located in the Training Room adjacent to the Northeast corner of the room. It has a camera overlooking the garage doors and feature breachable walls to the Northeast and West sides of the room, which can be covered with a total of ten reinforcements. However, there is also a dry wall that, while it cannot be breached, can be used to open a line of sight into the Laundry Room, as well as a blocked doorway that peaked through from both the outside and inside.

A Potential Location for the Hostage. This room is adjacent to the Garage and Training Room.

The Lower Half of the Side Stairs lead into the Laundry Room to the South doorway and the Training Room to the North.

A Potential Location for one of the Bombs. The other Bomb is located either in the Garage adjacent to the East of the room or in the Living Room above on the First Floor. To the South of the room is the House's Side Stairs

A Potential Location for the Hostage.

A Potential Location for the Bio Container and one of the Bombs. The other Bomb is located in the Training Room below in the Basement.

A Potential Location for the Bio Container and one of the Bombs. The other Bomb is located in the Workshop room parallel to it.

A Potential Location for the Hostage and the Bio Container. This room is adjacent to the Bathroom and the Kid's Bedroom, with the room being

A Potential Location for the Hostage

This map is used in Situation 2: Suburban Extraction. In this situation, the Operator in question is an FBI SWAT Recruit. The map contains very few terrorists, and only two appear at the extraction location after the Hostage is picked up. The Hostage always appears in the Master Bedroom and always uses the female model. They are also marked from the beginning of the Situation. Additionally, House is modified so that all windows excluding one are not enterable, and the Workshop is blocked by cabinets.

Main article: Mad House
Mad House is a unique gamemode and map available for a limited time during the 2018 Halloween season. The map has been revamped to feature Halloween decorations, such as Jack-o-lanterns, gargoyles, and cobwebs. A fog covers most of the map and eerie sounds can be heard. The mode follows the standard Bomb mode, but players are limited to choosing from ten Operators with Halloween-themed skins or the Recruit. The Defenders are Pulse, Jäger, Valkyrie, Mira, and Vigil, and the Attackers are Ash, Thermite, Buck, Hibana, and Finka. 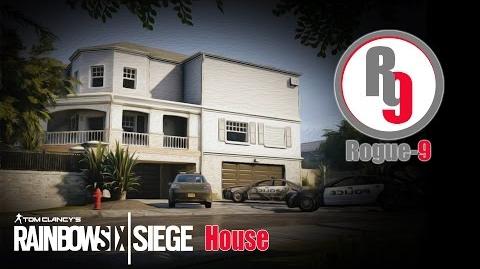