"All systems are complementary, if you know how to connect them."
— Iana

Meijer's mother was the lead engineer on the Huygens Atmospheric Structure Instrument that landed on Titan. Encouraged to reach for the stars from an early age, she earned her Bachelor's in Aerospace Engineering at the Koninklijke Militaire Academie. Meijer later applied to become a fighter pilot in the Royal Netherlands Air Force. Unfortunately, her albinism meant that she had compromised retina and her application was refused. She changed her focus to systems engineering and earned her Masters in Embedded Systems at the Delft University of Technology. She also studied at the John Hopkins University Applied Physics Laboratory. Meijer eventually developed contact lenses that overcorrected her genetic deficit while integrating a state-of-the-art AR overlay.

To earn her doctorate in Geo-Information Science, Meijer joined the ESA Network and Partnering Initiative. This gave her the first taste of where she longed to be. Meijier later joined the European Astronaut Corps and collaborated with the NASA Virtual Reality Laboratory. She participated in Project Sidekick in 2015 and traveled to the International Space Station. Her success with the project secured her spot in the planned NASA Expedition 67 mission. Returning to earth only fueled her desire to explore the farthest reaches of the cosmos, no matter the cost. She pioneered topographical mapping software that allows her to project a real-time, virtual copy of herself to anywhere visible by satellite or drone. It was this technology which caught the eye of Elena "Mira" Álvarez, and subsequently Six.[1]

Born under an auspicious star, Specialist Nienke “Iana” Meijer has always known she would set foot on another world. A consummate dreamer and practiced pragmatist, her greatest challenge has been convincing the world that her flights of fancy are not only possible, but practical.

The first time I met Specialist Nienke "Iana" Meijer she told me that the silver spoon I use to stir my tea has more in common with the nails that hold my chair together than the flatware of kings. She suggested a gold spoon for a less metallic aftertaste, but upon seeing me add sugar she amended it to zinc or copper. Marvellous. Her reductionist and frank approach is sure to challenge her fellow operators!

Her face lights up when she tells the story of watching the landing on Titan with her Mom, or of her precious few days on the International Space Station. It's clear these events triggered a growing impatience to go further and see more. Had she been born 200 years earlier, she would have been one of the intrepid souls mapping every corner of our tiny blue marble, but as it is she's had to settle for distant and less familiar worlds.

Reading Meijer's file, it's apparent that she succeeds through sheer intellect, resolve and fearlessness. Yet cocooned within her collaborative and outgoing exterior is a fragile core that she keeps guarded and private. Growing up albino wasn't an easy proposition, regardless of how outwardly tolerant society may seem. There was social stigma and childish name-calling, but these hardships fostered self-determination and self-assurance. Alone, she is like a raging river: Hell-bent on overcoming any obstacle that blocks her way, regardless of the personal cost.

She was eager to share her experiences and knowledge, and to grow within a very different sort of team than is her natural habitat. Especially thrilling is her ability to analyze a myriad of scenarios and to create discreet aspects of herself to tackle each of them simultaneously. Often, those who multitask have reduced outcomes in all areas, but here, also, Meijer is the exception.

I have every confidence that she will make an excellent addition to Rainbow. However, much like Specialists Eliza "Ash" Cohen and Elena "Mira" Álvarez, it will be paramount to ensure that she synergizes with her team, rather than struggling alone to cross-purposes.

A Medium Armored Operator, Iana's unique gadget is the Gemini Replicator. When activated, it creates a holographic decoy of Iana, which she can control remotely like a drone. It allows Iana to scout ahead and spot traps without setting them off, and can also trick Defenders into exposing themselves or acting prematurely.

Don’t be fooled by first impressions; the Gemini Replicator is anything but familiar or predictable. There are countless ways to use it to your advantage, and you’ll find out soon enough.

In short, the Gemini is a remotely-controlled holographic copy of Iana. When she deploys it, she can scout ahead with little to no consequences. It can move and produces sound like she would, but it obviously cannot shoot, melee or use secondary gadgets. The Replicator has a time limit, or it can be exited at any time. There is always a cooldown between two uses, which is longer if it’s destroyed.

The Replicator is all about fooling Iana’s opponents, as well as collecting information. During its deployment, she can find her opponents and cause confusion to her heart’s content. If the Gemini is spotted and destroyed by a Defender, it can help Iana deduce the threat’s location, but it will buy her opponents a few precious seconds to reposition.

Because Twitch and I fine-tuned Specialist Aria "Alibi" de Luca's Prisma display, Mira thought I would enjoy testing Iana's hovering projectors. Spoiler alert: they don't use the same tech and these drones are way more fancy than mine. Sure, Iana and I worked in the same field, but years apart - she's current-gen, while I'm more like the grandpa of aeronautics at this point. Hey, Mira, is this what it's like to feel old?

(Comment_A Quispe: You'll catch us up one day, pata.)

Anyway, I was able to repurpose the cloaking aspects of my Yokai to sharpen the edges of the image. The key to fooling opponents is for the projection to look and move like the real deal, otherwise it's a waste of time. There were some issues with collimation that accounted for the fuzziness of her render - fine if you're on another planet, not so great if you're trying not to get shot at. I came up with a more efficient projector housing that gets her the DPI she needs, at barely a fraction of a percentage point more in energy consumption. You're welcome. 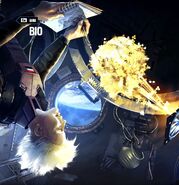 Iana as seen on the Void Edge TTS