The Impact Grenade is a gadget featured in several installments of the Tom Clancy's Rainbow Six Franchise.

The Impact Grenade is an explosive grenade that, as its name implies, detonates on impact and deals light damage, designed to efficiently create rotation routes and lines of sight. Once thrown, Impact Grenades can travel up to 20 meters before hitting a surface or detonating mid-air.

The explosion from the Impact Grenade inflicts up to 60 damage. The damage drop-off is extreme, Impact Grenades won't do damage if they land more than 2 meters away from the opponent.

If detonated on a destructible wall at the proper height, the Impact Grenade will create a hole large enough for an Operator to walk or run through. However, if the grenade is detonated too low or too high, the hole may only allow Operators to crouch or vault through. Impact Grenades can also destroy unreinforced hatches and create lines of sight on destructible floors. 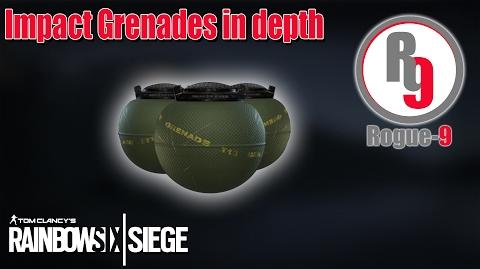 "Detonate an intense shockwave that knocks back Archæans.
Throwable grenade, detonates on impact in a 7-meter area."
— In-game Description

The Impact Grenade is a tech tier 1 explosive featured in Tom Clancy's Rainbow Six Extraction. It functions in a similar manner as its counterpart in Siege and will detonate on impact with any surface or enemy.

The Impact grenade will kill most low tier enemies while higher tier enemies will take significant damage and become stunned. This enables players to then perform a Takedown and kill them. Impact grenades are also useful for creating new paths through destructible walls or destroying Sprawl to escape pursuing enemies. Like other explosives, an Impact Grenade can be used to remove Blinding Spores from oneself or teammates. It can also be replenished at resupply cases.