Start a Wiki
watch 01:16
'Rainbow Six' Profile: Jaeger
Do you like this video?

Marius Streicher was born in Düsseldorf, Germany. He was raised by his uncle who was a mechanic with the Bundespolizei (BPOL) Aviation Group. As a result, Streicher was around engines and motors at an early age. While he demonstrated skills in mechanics, it didn't hold the challenge that he was looking for. Since he had an affinity for complex machinery, his uncle encouraged him to study aeronautical engineering at university, but the strict academic form was an uncomfortable fit for him. So while Streicher's grades were acceptable, he had a tendency toward restless antics. Following his hobby and passion for flying, he spent considerable time around pilots and aircraft.

Private corporations sought him out, but Streicher joined the BPOL-Aviation Group as a helicopter technician because it offered him unique challenges, the opportunity to fly and to serve his country. Almost immediately, Streicher began designing defense weapon systems for BPOL including a ground-based Active Defense System (ADS) prototype. It was this prototype that caught the attention of the GSG 9. A veteran of the GSG 9 anti-piracy ops in the Indian Ocean, he was later recruited to Rainbow.[1]

Streicher is highly creative and curious, with a strong desire to serve. He has a tendency to lack humility. Though he has a remarkable affinity for complex machinery, he is not adept at reading social cues. Coupled with his boisterous tendencies he can be a bit abrasive.[2]

Specialist Marius "Jäger" Streicher has a creative curiosity that's reflected both in his operations and his daily life. The first part of our conversation was spent discussing a documentary that he watched the night before, about scientists searching for new antibiotics. Streicher was so caught up in it that he sent the link to Specialists Gustave "Doc" Kateb, Emmanuelle "Twitch" Pichon, and Lera "Finka" Melnikova. I'm sure they were all equally interested, if maybe not thrilled to be contacted so early in the morning.

That was only the start of our conversation. Streicher discussed other documentaries that he found fascinating: NASA sending a probe to the sun, new discoveries about Tyrannosaurus Rex, really anything to feed his voracious appetite for information on any subject. Robotics and artificial intelligence are the topics he seeks out the most but he enjoys almost anything. […]

Streicher's lively energy made for a dizzying meeting. Though the conversation wasn't erratic, it had a path, I admit I wasn't able to see it until I noticed that he often mentions the team: Wondering if so-and-so is doing alright after the loss of their dog if another one received the birthday card he sent and other references. Streicher enjoys sharing information so that he can make a connection. Not just his connection with individuals, but a web of connections among everyone. […]

His own upbringing wasn't particularly lively or warm and the small family meant that he had very little company his age. He told me that his uncle was a fussy man - nitpicky. Streicher appreciates his uncle and all that he taught him, going so far as to say that his uncle made him a better person. But Streicher did also say that his uncle was closed off and had no sense of humor. I believe the translation is "grouchy bean counter." Understanding this background shines some light on why Streicher is so eager to create these connections with his team. He sees them as family. It certainly explains how intensely protective he is of them either on operations or during downtime.

A Medium Armored Operator, Jäger's unique gadget is the ADS-MKIV "Magpie", which can intercept live grenades before they detonate.

Active defense systems have been successfully used on ships and tanks for the last decade to destroy incoming explosive projectiles. Typically weighing over a hundred kilograms, such systems have been unusable by troops who need systems that are portable or suited for rapid deployment. Using the most advanced military-grade components and material available, the "Magpie" blends the best miniaturization, defense, and engineering technology. 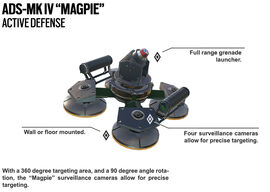 Mira tasked me with the evaluation of my ADS-MKIV "Magpie." Spending hours in a test lab sounds like my type of vacation - no joke. I'm always on the look-out for where things can be improved. For reference, I have attached the field test data for comparison. Data-Data-Data!

Before we get to that, let's explore the importance of studying defensive strategies alongside breaching techniques throughout history, as well as the evolution of tech -

(Comment_E. Alvarez: References on defensive strategy, historical analysis of strategies, historical documentaries, list of favorite books have all been archived. *Marius, the details are interesting (and I agree with some of your favorite movie picks) but please keep this file focused on the tech results. Mira.)

Now that those references help explain my tactical approach, we can better understand these tech results (attached). To sum up: The Magpie is operating at optimal performance. My gear and my operator strategy will - as Pulse says - "continue to cause many salty tears" for our opponents.

Jäger's trailer concept art
Add a photo to this gallery

Jäger armed with an M870 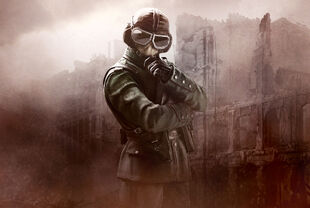 Jäger in the Flying Ace Set 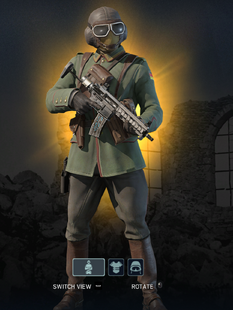 FLYING ACE
Add a photo to this gallery

Jäger in the 8-Legged Bundle

Jäger in the Rock Star Bundle

Jäger in the Anaconda Bundle

Jäger in the Aerial Bundle

Jäger in the Covert Set

Jäger in the Savior Bundle

Jager deploying his ADS
Add a photo to this gallery

Jager's Current Icon
Add a photo to this gallery 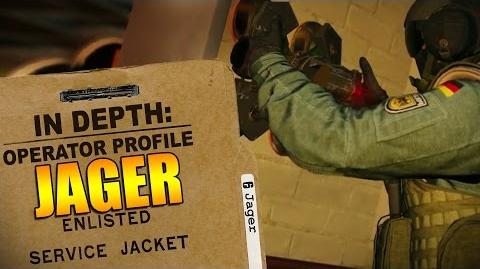 Jager's Current Icon
Add a photo to this gallery

Retrieved from "https://rainbowsix.fandom.com/wiki/Jäger?oldid=78953"
Community content is available under CC-BY-SA unless otherwise noted.