"One of my better tactical strategies is to stay alive. So far so good."
— Jäger

Marius "Jäger" Streicher is a REACT Operator appearing in Tom Clancy's Rainbow Six Extraction. He is unlocked at Development Milestone 5.

In February 2018, the Chimera Parasite emerged in the town of Truth or Consequences, New Mexico. Over the next ten days, the parasite infected the majority of the town's population though government officials were able to successfully contain it for the time being. At the request of Eliza "Ash" Cohen, Streicher and several other Rainbow operatives arrived at site to help with containment. Streicher acted as Rainbow's helicopter pilot for several missions in the area. During a mission to destroy a nursery established by the Parasite in the Sierra Paradose resort, Streicher's helicopter was attacked during the extraction and crashed. While injured, Rainbow was able to rescue him and leave the area.

Despite his injuries, Streicher continued to support the containment efforts. Rainbow later traveled to the junkyard of Boyd Brooks to find and recover the capsule where the Parasite originated. Despite heavy opposition, Streicher was able to remove the capsule via helicopter. While Rainbow was able to contain the Parasite for the time being, the town was effectively destroyed.

After witnessing the Parasite’s devastating capabilities first-hand, Streicher volunteered to join the newly formed REACT when the Parasite reemerged a few years later. He also brought his updated "Magpie" Automated Defense System (ADS) to the fight against the Archæans.

Speculating on Streicher's fascination with the Chimera: May be related to his fascination for figuring out how things work. The Chimera is a singular organism but he sees it as just a complex system. A challenge. (Validate with psychological assessment)

A Medium Armored Operator, Jäger's unique gadget is the ADS-MKV "Magpie", which has been modified to function like a sentry turret. It will fire on all incoming projectiles (Spikers and Tormentors most prominently), Sower mines, and any enemy within its proximity. It uses high explosive rounds that will generally Obliterate most hostiles that it destroys, preventing Sprawl spread.

The ADS, at base, takes 20 seconds to recharge one round, and deals 28 damage. Turrets that are not empty can be retrieved for later use - when a turret uses its last round, it will self-destruct and need to be replenished with an Ability pickup. The radius seems to be at least 6 meters, but is not clearly marked, unlike in Siege. 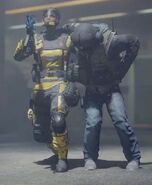