"Taking place in the industrial area of Hamburg, Germany, ‘Kanal’ involves multiple buildings with strategic connecting points over canals. It features many interesting strategic possibilities created by the many bridges, buildings and related vantage points of its terrain."
— Ubisoft Description

Kanal is a map featured in Tom Clancy's Rainbow Six Siege, taking place in Hamburg Germany. The map was reworked in September 2019 with the release of Operation Ember Rise.

This map is used in Situation 5: Cold Zero. The Operator in this Situation is Glaz, attempting to rescue a hostage. The map contains one Bomber, and he appears to not roam, but instead wait outside the hostage room until the hostage is taken, after which he rushes the player.

The Hostage appears in the Control room, which has been edited to have most of its windows unbarricaded. It is always marked at the beginning of the situation. He always uses the male hostage model. The extraction point is at the Floating Dock.

Kanal Rework Side By Side Comparison Rainbow Six Siege 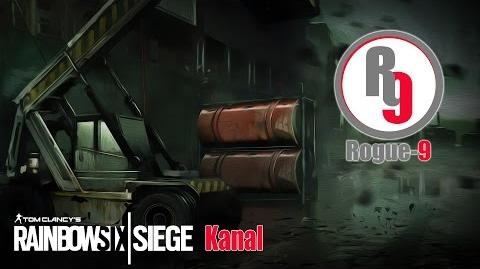