Start a Wiki
watch 01:21
'Rainbow Six' Profile: Kapkan
Do you like this video?

Maxim Basuda was born on May 14, 1979 in Kovrov, Russia. The eldest of three brothers, Basuda was surrounded by the influence of the Russian military. Both parents worked in the military support factories, his father in mechanical engineering and his mother in textiles. Hoping to escape a grueling life in the factory, Basuda was encouraged by his parents and teachers to enlist in the Ministry of Internal Affairs. Along with the standard training of weapon expertise, protection detail, and high speed pursuit, Basuda showed adroit skills with hostage rescue and information gathering.

Clever strategies and self-sufficiency meant that Basuda was perfect for an undercover operation in the port town of Naryan-Mar on the Barents Sea. His successful efforts to shut down organized crime prompted his recruitment into the highly respected Spetsnaz. Basuda became an avid hunter and trapper during his time in the Arctic Circle, before being transferred to Beslan in 2002.[1]

For Basuda, life is harsh - made harsher by humans. Decisive action and level headedness are what matter. Like wolves 0 not the fairy tale kind, but the real ones - Basuda considers himself loyal. Wolves, he explained to me, are devoted to family. All members raise the young, and they work together as a team when hunting. […] Given his explanation, I wondered if he may feel somewhat lonely. A wolf without a pack. At my mention of it, he laughed and tappe dhis temple and told me he loves brain science - that my job studies the mind but then is almost always about the soul. Listening to him wax philosophical, I found I couldn't help but agree.

A Medium Armored Operator, Kapkan comes equipped with his homemade EDD MKII Tripwires, special mines that can anchor on doorway and window frames, detonating when enemies trigger its laser. 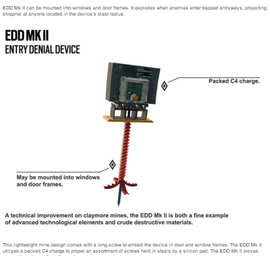 It's exciting to be part of these evaluations So I want to extend my thanks to Rainbow Direct Harry (Six) Pandey and Director Elena (Mira) Alvarez for including me. Because of my Welcome Mats, Mira felt that I'd be the best choice to take a closer look at Kapkan's EDD MK II traps. So Kap and I got right to work running our gear through a series of tests: Stress, deployment and tactical. We made use of every part of the state-of-the-art lab.

I learned more about Kap over these past few days than from all of the operations we've been on together! He taught me a few new tricks. And despite what he says, I think he learned some things from me too.

Kapkan's concept art
Add a photo to this gallery

Kapkan armed with a 9×19VSN 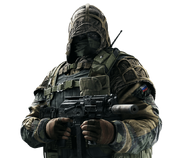 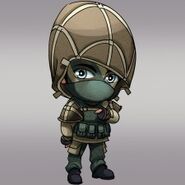 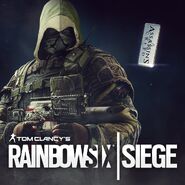 Kapkan in the Assassin's Creed Set

Kapkan in the 8-Legged Bundle

Kapkan in the Imperceptible Bundle
Add a photo to this gallery

Kapkan's Icon
Add a photo to this gallery 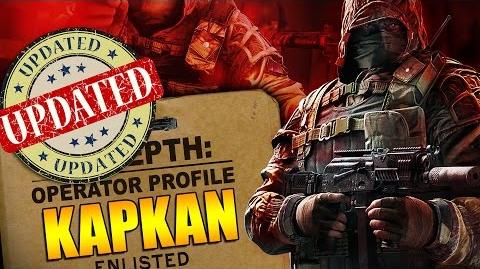 Retrieved from "https://rainbowsix.fandom.com/wiki/Kapkan?oldid=66343"
Community content is available under CC-BY-SA unless otherwise noted.