A Knife, or known primarily as a Combat Knife or Fighting Knife is a cutting weapon designed for military use, specifically for close combat; however, since the end of trench warfare, most military knives have been primarily designed for utility/tool use (clearing foliage, chopping branches for cover, opening ammunition crates, etc.).

The Knife is an available weapon for all Operators in Tom Clancy's Rainbow Six Siege. It serves as a backup weapon in the event that a player has run out of ammunition or is engaged in close quarters combat. The knife kills all enemies in one hit should it make contact.

If used on a destructible surface, the Knife will leave a small hole on the surface allowing Operators to peek through. 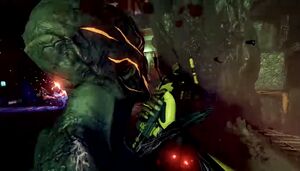