The Laser Tripmine is a gadget featured in several installments of the Tom Clancy's Rainbow Six Franchise.

"Once placed on the ground, a small laser beam projects outward from the center of the mine, which detonates once the path of the beam is broken."
— In-game description

The Laser Tripmine is a piece of equipment featured in Tom Clancy's Rainbow Six: Lockdown.

In the PC version of the game, the Laser Tripmine is exclusively used by the Mercenary faction in the multiplayer.

The Entry Denial Device MKII Tripwire is a gadget featured in Tom Clancy's Rainbow Six Siege. It is a unique gadget available to Kapkan. These mines can be anchored on any barricadable doorway or window frame, detonating when enemies make contact with its laser.

An EDD creates an invisible horizontal laser tripwire across the doorway it is placed on, shooting from the centre of the EDD. An EDD will trigger and explode when an Attacker touches the tripwire. An EDD laser tripwire cannot cover more than its designated entry point.

The base damage of an EDD explosion is 60. This damage is affected by an Operator's Health Type, so Operators with Medium or Heavy Health will receive 51 and 45 damage respectively from the explosion. The explosion has an effective range of three meters before dropping off harshly.

Kapkan spawns with five EDDs. All fives devices can be deployed on the same frame. The position of the deployed EDD corresponds to the position the player was aiming at when starting the deployment animation. The lowest an EDD can be placed on windows is around chest-height. The lowest placement on a doorway is varied between doorways, although it is usually between shin-height down to being at ankle-height. In either case, the highest an EDD can be placed is head-height. Hiding an EDD on a doorway or window by using any environmental obstruction can be key in order for them to go unnoticed. Placing an EDD where enemies don't have a direct line of sight on them can trick them into thinking they're safe. 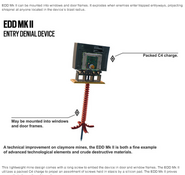