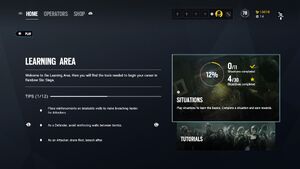 It consists of Situations, the Shooting Range, Tutorial Videos, and Tips. Each is meant to give players a better understanding of the game and an opportunity to test game mechanics without a multiplayer setting.

Situations are a series of eleven different tutorial missions that task players with completing various scenarios. Each Situation is played on a specific map with a specific Operator. This gives players a basic introduction to several Operators and maps. It should be noted that several Situations are played on the original versions of maps prior to their rework such as Hereford Base.

Each Situation features three specific challenges that award one star a piece once completed. For every challenge that is successfully completed, the player will earn 200

The Shooting Range is set to be introduced in the Operation Vector Glare expansion. It allows players to test weapons by firing at targets at various ranges. All Operators and their weapons are available, even if they are not unlocked.

There are three Tutorial Videos that give additional information about Barricades, Walls, and Floors. Watching the entireity of a video will give players a one-time award of 200