Olivier "Lion" Flament is a REACT Operator appearing in Tom Clancy's Rainbow Six Extraction. He is unlocked by default.

Lion led the charge to contain the original outbreak in New Mexico. His background as a CBRN specialist makes him essential to the efforts to combat this new crisis. R6 Command knew immediately that his skill with the EE-ONE-D drone would be vital to combating the Archæans and supporting his teammates.

This page features a Codex Entry.

Flament's expertise in virology, particularly containing outbreaks and vector control protocols, will be invaluable in assessing and studying the Chimera organism. Probability High.

Flament's relationship with his son ("Alexis") has probably contributed to his clarity of purpose (determination). Expect net-positive effect on team dynamics. (Corroboration needed from with assessment team)

A Medium Armored Operator, Lion comes with his EE-ONE-D, which flies up above the map to scan for enemy movement at his command. If an enemy moves during this scan, the drone will detect that movement and display them for players to see, even through walls - most Archaeans move frequently enough for the drone to pick up, but the drone will generally not detect Nests, or enemies that are standing idle and not aggressive.

The initial duration, from level 1 to 5, is 20 seconds, while the initial cooldown is 60 seconds, beginning after the duration ends. 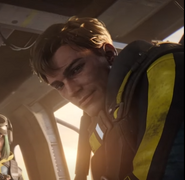