Olivier "Lion" Flament is an Attacking Operator in Tom Clancy's Rainbow Six Siege. He was introduced in the Operation Chimera expansion alongside Finka.[1]

Olivier has managed to stay in his son’s life, but it is an awkward relationship. Alexis does not know how to call him father and Olivier is not sure what it means to be a dad in the day-to-day. He has mended bridges with his parents and sister, his return to the Catholic faith healing those wounds, and while his decision to be a soldier bothers them, he is no longer the thoughtless rebel. He is not a soldier to make life easy on his soul. He bears the weight of responsibility for what he has done even though Bertrand constantly reminds him that forgiveness is in the heart of God.[2]

In 2022, Olivier was placed on Rainbow's new humanitarian squad, Wolfguard, under the leadership of Gustave "Doc" Kateb. Olivier, Gilles "Montagne" Touré, and Ngoma "Sens" Mutombo later trained extensively with one another to become familiar with each other's capabilities. Shortly after, the three of them deployed on Operation Vector Glare to rescue an architect who was being held hostage at a refinery by local militia. It was believed that this architect held schematics that would detail how Nighthaven was involved in Masayuki Yahata's assassination. After entering the refinery, Sens took point and singlehandedly dispatched most of the militia. They were then confronted by a militiman wielding a minigun. With Touré using his shield as cover, Sens managed to flank and kill the man. They then used the man's helmet to convince the two remaining militia members to release the architect and surrender.

Olivier spends most of his social time at Church volunteering when he can, or at his apartment reading and staying out of trouble while listening to the angry albums of his teenage years. [3]

A Medium Health Operator, Lion comes with his EE-ONE-D, which flies up above the map to scan for enemy movement at his command. If a Defender moves during this scan, the drone will detect that movement and ping them repeatedly for Attackers to see, even through walls.

The EE-ONE-D was provided to Lion by Twitch while he served with the GIGN. This aerial drone allows Lion to survey and maintain quarantine protocols on missions. He uses it to detect movement in an area in order to determine if someone is breaking quarantine, curfew, or a perimeter. His drone can stay airborne indefinitely, but he must choose the right moment to perform his scans.[4] 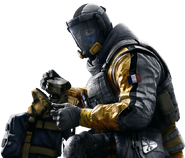 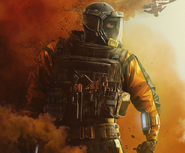 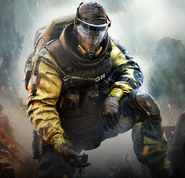 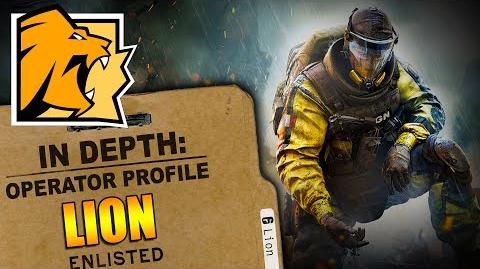