The M468 is an assault rifle manufactured by Barrett Firearms Manufacturing in 2004. The M468 received its designation because it was built off of the M4 Carbine and chambered for the 6.8mm Remington SPC (Special Purpose Cartridge). Because it used a different cartridge, the M468 could not accept regular STANAG M16/M4 compatible magazines. Barrett designed their own proprietary all-steel magazines. They could still fit in standard ammo pouches but could only hold 28 rounds. Production of the M468 ceased in 2010, and was replaced by the REC-7 assault rifle then in development.

The M468 is categorized as an assault rifle in the Rainbow Six universe.

The M468 is a weapon featured in Tom Clancy's Rainbow Six: Vegas 2. 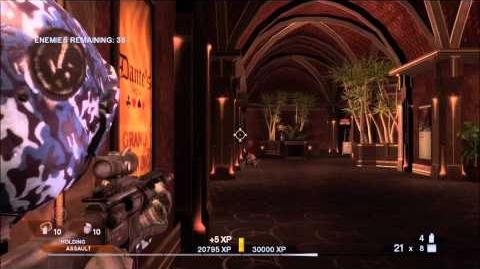 " This telescopic weapon, fired from the shoulder and fed by magazines, is operated by gas and cooled using air. It is shorter and lighter than the more common military rifles, allowing individual combatants to operate better in close quarters."
— In-game Description

The M468, designated in-game as simply the Assault Rifle, is a weapon featured in Tom Clancy's Rainbow Six: Shadow Vanguard.