"Fragmentation grenade that explodes shortly after the pin is pulled."
— In-game description

The Frag Grenade is a gadget featured in Tom Clancy's Rainbow Six Siege.

The Frag Grenade is an explosive grenade that detonates on a fuse and deals lethal damage.

Since Frag Grenades explode on a fuse, it can be a good idea to "cook" a grenade in order to cut the enemy's chances of escaping its explosion. When activated, the Attacker has a 4 second time period to throw the grenade. If not thrown after 3.5 seconds from activating it, the grenade will explode in their hand, killing them and damaging nearby players. The reticle flashes while cooking the grenade to help with timing. One second after pulling the safety, the reticle will flash for four times every third of a second, then turn to quicker flashes one per every sixth of a second. Cooking can be cancelled by switching to a weapon.

Since its explosion can tear through destructible objects much like its alternatives, Frag Grenades possess the ability to breach soft surfaces. Frag Grenades can effectively breach hatches. Breaching walls however, will be more of a challenge, as the Frag Grenade's bouncy and fuse-detonated nature makes it difficult to consistently create big or high enough holes for operators to efficiently pass through.

The Frag Grenade will still continue to cook and proceed to detonate even after an Operator holding it has died. In this case, no threat indicator will be shown. 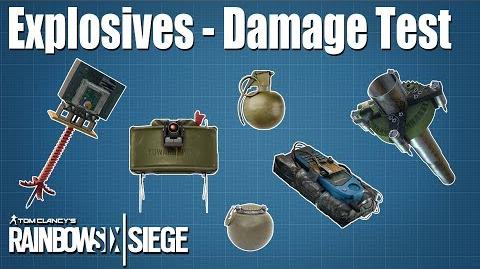