Edit
watch 02:52
Roblox: DeepWoken - The Loop
Do you like this video?
Play Sound
For the other similar variant, see TMP

The MP9 (Machine Pistol 9mm) is a derivative of the TMP machine pistol. The MP9 is a machine pistol manufactured by Brügger & Thomet that chambers the 9×19mm Parabellum round.

The MP9 is categorized as a submachine gun and a machine pistol in the Rainbow Six universe.

The MP9 is a weapon featured in Tom Clancy's Rainbow Six: Vegas. It can be fit with a variety of attachments, just like every other submachine gun in the game.

The MP9 being reloaded in R6V1. This MP9 is fit with a reflex scope and a suppressor.

The MP9 is a weapon featured in Tom Clancy's Rainbow Six: Vegas 2. Since Vegas 1 and 2 share the same engine and models, it appears in the same configuration as its Vegas 1 counterpart. The weapon has a damage level of 5, range level of 2 and an accuracy level of 9. Each clip can hold 30 rounds and the user has a total of 8 clips to use. The MP9 can be used in semi-automatic or fully automatic fire. It fires at roughly 14 shots per second.

Iron sights of the MP9. Note that the sights are misaligned.

The MP9. This MP9 is fitted with a laser sight 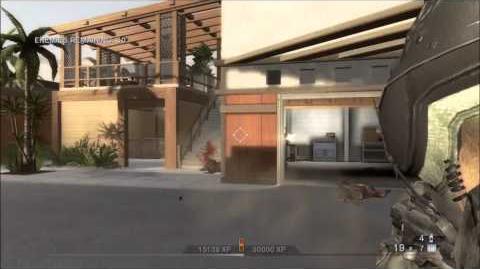 The SPSMG9 is a machine pistol featured in Tom Clancy's Rainbow Six Siege, introduced in the Operation Grim Sky expansion. It is available for use by Clash and Kali.[1]