Edit
watch 02:56
Raise a Floppa - The Loop
Do you like this video?
Play Sound
For the Codex entry, see Maelstrom Protocol (Codex).

"We now have a window of opportunity for continuous Sub-Zone infiltrations. That means a wealth of intel for the taking to propel REACT R&D to new heights. This is the most dangerous of incursions. A limited roster of Operators will rotate in out of duty to maintain safety standards. Expect limited field resources and modified security measures. Failure to exfil results in loss of all intel. You'll be considered MIA. This is the ultimate challenge and only you can determine how far you'll go. REACT is activating Maelstrom Protocol."
— Thermite 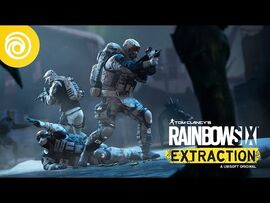 Maelstrom Protocol is the ranked PVE playlist featured in Tom Clancy's Rainbow Six Extraction and is unlocked at Development Milestone 16.

While similar to the standard Incursions playlist, it offers several notable differences. Completing weekly challenges within Maelstrom Protocol will reward players with REACT Credits to use in the in-game store.

Matches played in the Maelstrom Protocol are played on the critical difficulty and task players with completing objectives in nine subzones with a pool of six Operators. Objectives must be completed or failed in order to progress to the next subzone. Every subzone has a unique Parasite Mutation Objectives within matches will always remain the same during a week. This incentivizes players to strategize and change tactics should missions fail. At the end of each week, Operator pools, objectives, and Parasite Mutations will be rotated accordingly.

The amount of resources available will also be reduced significantly as players progress through subzones. Medkits are no longer available after the third subzone. In addition, Ability Recharges and REACT gear cannot be found after subzone six, While Ammo boxes disappear after the eighth subzone. Due to the overlap of all these rules, Subzone Nine has no supplies. As such, it is advised to remain in the subzone after the objective is completed, search for all supplies your squad can acquire, and only move to the airlock when 3-2 minutes are left. Should an Operator become MIA, they can be rescued in a normal Incursion. Successful runs will reward players with large amounts of XP which will go toward a player's ranking and challenge progress.

Maelstrom Protocol features five ranks that are dependent on how much XP has been earned within the playlist. Earning ranks will reward players with unique Headgear and Charms to showcase their status. Though the Headgear will be lost once the season ranking has reset, players will permanently keep the Charms they obtained. Headgear can be obtained again during the next season ranking. 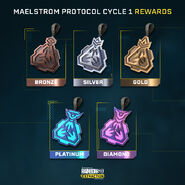