"Did I ever tell you about the time we tree-jumped into the Congo Swamp at night? No? Oh, it's a good one."
— Maestro

Adriano "Maestro" Martello is a Defending Operator featured in Tom Clancy's Rainbow Six Siege. He was introduced in the Operation Para Bellum expansion alongside Alibi.[2]

Adriano "Maestro" Martello, oldest in a family of eight children, grew up in Rome, but attended the Military Academy of Modena at 18. He joined the Carabinieri and earned a spot as an Explorer Paratrooper in the 1st Paratrooper Regiment known as Tuscania. After several distinguished tours where he earned Silver and Bronze Medals of Military Valor, Martello qualified for Gruppo di Intervento Special (Special Intervention Group or GIS) and participated in jointed operations in Iraq, earning a facial scar from a roadside IED. He engaged in multiple actions against homegrown threats in Italy and eventually became an instructor helping train Tier 3 units in the Italian military.

After Maestro's tour was completed, he went into private consultation where his courses became a top-rated operator boot camp for teaching advanced techniques to Tier 3 and Tier 2 units, as well as private military companies. The Tuscania eventually convinced Martello to re-enlist to help upgrade one of their units to a Tier 2 Special Forces classification, and this enabled him to join Rainbow as a representative of the Italian Units.[3]

I have no doubt that Specialist Adriano Martello (AKA: Maestro) is a natural leader. He had earned the nickname Maestro due to his willingness to sacrifice first place in order to help other soldiers during basic training, and while records indicate that some soldiers didn't appreciate the handholding, I think it refined Specialist Martello's teaching methodology.

I did review his school records in regards to the fights he got into, and I believe he was keeping his brothers and sisters out of trouble by fighting for them.

He initially entered the military to ease his parents' financial burden in raising eight children and he carries that sense of responsibility into his units. He cares about the men and women he serves with and has an affinity for bringing out the best in others, even if it's with a bit of good-natured bluster and perhaps more vulgarity than some of our more reserved operators are used to. I suspect Specialist Martello enjoys effect though there is no doubt that he teaches through anecdotes. He presents himself as genuine, however, and it's an undeniable part of his charm because it comes off without any sort of duplicity.

Specialist Martello will make an excellent Tactical Control Commander one day, but his biggest liability is his own wanderlust.

He loves pursuing challenges to his own detriment. Once he's conquered an objective, there's little keeping him rooted. He has personal ties with Specialist Seamus "Sledge" Cowden (Joint Operations in Iraq before Article 5 was instituted), enough that to my understanding he's invited Specialist Cowden over to visit his family when the pair were cycled off-duty rotation. Even then, I doubt it's enough to keep him tied to Rainbow Operations. His ties to Specialist Aria "Alibi" de Luca may be a different story, however. They worked closely together during Operation Spider Wasp, with Specialist Martello's unit taking down organized crime targets based on Specialist de Luca's intel. Whatever other history they share remains unknown to me... for now.

It is my estimation that Specialist Martello needs a carrot to remain invested, and that means presenting him with challenges that he's likely to fail at. It's why I recommend Specialist Martello step into the boxing ring with Specialist James "Smoke" Porter, for example, and pit him against a boxer with more training and skill. From my records, Specialist Martello grew up in the lower income neighborhoods along Rome's Lungotevere, where he befriended many Romany children. He boasts about boxing with the Romany, a strong tradition in that culture, and I believe that training him with Porter will encourage positive memories that will link his childhood with Rainbow.

Another option is to arrange for Specialist Mike "Thatcher" Baker to take a personal interest in Martello's development. Martello has nothing short of genuine respect for Specialist Baker, enough to keep him tongue-tied around the SAS veteran. That state of deference may forge a strong enough bond to keep Specialist Martello invested in the Rainbow program.[4]

A Heavy Armored Operator, Maestro comes equipped with two Compact Laser Emplacements (CLE-Vs), otherwise known as his "Evil Eyes". These gadgets are bulletproof, gyroscopic and can see through smoke. The laser functions of the Evil Eyes will cause it to become vulnerable as it opens up, but will unleash low-damage but rapid laser shots for a few seconds before overheating and automatically closing itself.

Maestro uses a remote-controlled turret firing high-energy laser beams. Once affixed to the floor or wall, Maestro can remotely-surveil and provide overwatch in a location through the swivel-mounted camera. When the camera device breaks open to fire a laser beam the core is exposed to damage. Otherwise, the turret is unaffected by bullets and melee. Lastly, an Evil Eye can see through smoke.[2]

"Six, as requested, I have outfitted Specialist Adriano "Maestro" Martello with the newest prototype of our Compact Laser Emplacement (CLE-V or Cleave)."

"The CLE-V serves a dual battlefield function with its camera and its laser, allowing Specialist Martello to be a lethal presence in many locations at once. Once he mounts the CLE-V on the floor or wall, he can remote-surveil and provide overwatch in a location through the swivel-mounted camera. In combat protocols, he can open the bulletproof aluminium oxynitride lens (provided by Specialist Alvarez) and fire on any threats in the area using the highly energetic laser."

"I took the liberty of resurrecting the device from the old programs that used a bulky airborne laser to shoot down incoming missiles, but my device is a sports car compared to the old wide-bodied jet liner-sized devices that they originally had in mind."

"I additionally outfitted it with an All Gas-Phase Iodine Laser (AGIL) and state of the art micro-batteries to reduce weight and to provide a short range but powerful punch in compact form."

"In closing. I do have one complaint. Specialist Martello has continually ignored my requests to use the official name of the device (CLE-V) and instead on calling it "the Evil Eye." That is not its name and I believe he calls it that to irk me." 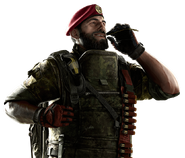 Maestro armed with an ALDA 5.56

Maestro armed with an ACS12 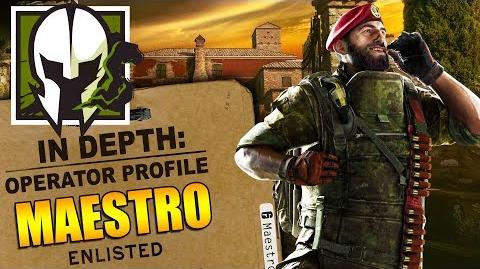