Marseilles is the twelfth mission in the PC version of Tom Clancy's Rainbow Six: Lockdown. Its console counterpart is Operation Lowlife.

It looks like we caught a break on who stole Legion. A former KBG agent Nicolai Yazhov claims to have the information that we need. He says he knows who's been supplying his terrorist organization, the October Resistance and others with the virus weapons that you've encountered. In addition, Yazhov knows of an upcoming terrorist attack that he claims could change the world forever. He's afraid for his life and is requesting extraction out of Marseilles in exchange for the information he carries. Your orders are to locate extract Yazhov. Chavez, you and Price are going in on this one. Six out. 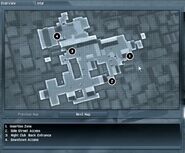 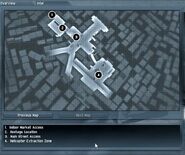 Marseilles Mission Walkthrough
Add a photo to this gallery
Retrieved from "https://rainbowsix.fandom.com/wiki/Marseilles?oldid=61297"
Community content is available under CC-BY-SA unless otherwise noted.