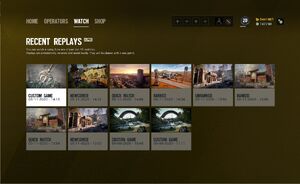 Match Replay is a new Spectator mode featured in Tom Clancy's Rainbow Six Siege. It was announced on February 16th, 2020 at the Six Invitational 2020.[1] An early version of the feature became available on the Test Server on August 17th, 2020 during the Operation Shadow Legacy expansion.[2] A beta version of the feature was introduced to the PC version of the game with the release of the Crimson Heist expansion. Match Repaly was released on consoles in the Demon Veil expansion.

The feature allows players to replay the last twelve matches they've participated in so that they can be reviewed to learn from mistakes, analyze tactics and strategy, or gather footage for content creation. Up to twelve matches can be saved locally.

Players will be able to spectate from both first-person and top-down points of view, from any player, and any angle. Matches can be fast forwarded or rewinded at any point during the session.

Ubisoft has stated that the feature will eventually support functions such as storing match replays on the game server instead of locally, sharing matches with friends, and downloading and watching replays from official esports matches.[3]

On PC, the game stores replay files locally under Tom Clancy's Rainbow Six Siege\MatchReplay folder, which can be found in the game files directly (not to be confused with Documents/My Games/Rainbow Six - Siege). A replay can be saved by copying the entire folder of the replay to a safe location.

The game will delete replays in its internal folder when they exceed 10 files. To import more replays back into the game, they must be rotated within the folder.

How To Save Rainbow Six Siege Match Replay (CrimsonHeist)