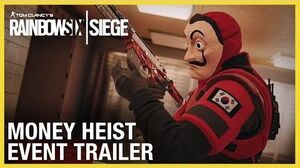 Money Heist, also known as La casa de papel, is a limited time event in Tom Clancy's Rainbow Six Siege that was introduced during the Operation Ember Rise expansion. The event is in collaboration with the Netflix series of the same name, Money Heist.[1]

The event takes place on Bank with the standard Hostage gamemode. Unlike the normal version, however, the hostage is dressed in the signature jumpsuit and mask of the main characters in the television series. Money Heist ran from November 20, 2019 to November 25, 2019.

Two bundles themed around the event were introduced for Hibana and Vigil. Both bundles are available until approximately November 2020 and cost 1680 apiece.

Retrieved from "https://rainbowsix.fandom.com/wiki/Money_Heist?oldid=79749"
Community content is available under CC-BY-SA unless otherwise noted.