Edit
watch 01:29
'Rainbow Six' Lore: Montagne
Do you like this video?
Play Sound

"Every conflict is an iteration upon the last. Every scar, a victory."
— Montagne

Touré was born on October 11 in Bordeaux, France. The son of an army officer and school teacher, he is the middle of four siblings with two older brothers and a younger sister. A few years after graduating high school, Touré began his law enforcement career as a uniformed police officer in the National Gendarmerie. They used his imposing form whenever there was a need to show a strong police presence, earning him a spot in the Mobile Gendarmerie where the focus was on crowd control as well as military and counter-terrorism patrol missions. Touré's push for extensive training provided him with a broad skillset and earned him a position in the GIGN.

After many years of service and involvement in numerous incidents such as the 1994 French Airline hijacking, Montagne has become the longest-serving GIGN operative. Touré is a certified GIGN instructor when not deployed with Rainbow. Though he's best utilized for his breaching techniques, Touré also has training in combat engineering and reconnaissance.[1]

Touré is considered highly dependable by his peers. His steady nerves have allowed him to take control of complex, high-stress situations during the tenure of his career.

As a trainer, Touré is stern with the new recruits but always tries to remain fair. He prefers to lead by example.[2]

Specialist Gilles "Montagne" Touré's imposing presence, along with his unwavering gaze, is impressive and (as a tactic) I can see how it can be unsettling. He's a man of few words, even among his friends. I chose to visit him at one of the GIGN Training Centers so that he'd be more comfortable talking. […] Observing Touré with his trainees gave me a better sense of him. In this capacity he was accessible, fair, and even gregarious. […]

We started by discussing his role as an instructor. Touré was excited that Rainbow continues to evolve and is proud to be a part of it. He told me there's always a lot to learn from his peers and that, lately, he's been trying to stretch beyond his comfort zone. He has certainly taken the lead on including more virtual simulation in our training. He's hoping to incorporate the unique skills of operators such as Specialist Grace "Dokkaebi" Nam in his next sessions. […]

Touré has a naturally protective nature. His choice to enter law enforcement speaks more to that than his family's military history. The middle of four - his two brothers are also in the military - Touré said that the family raised them to be protectors. Their parents recounted stories of various ancestors who fought for what was right. […] He believes that education is the solution to many of the world's problems. His sister finished her police training but switched to teaching when she felt that was where she could do the most good.

Because Touré has an understated confidence, I was surprised when he expressed doubt about his role in Rainbow. Many of our operators are exceptionally skilled with languages. Touré isn't. None of the reports suggest this is an issue, but even a perceived weakness can become debilitating. I encouraged him to select one - only one - language to focus on studying, and asked some of the other specialists to make an effort to include him in their conversations. If all goes well, it'll feel less like he's being tested and more like he's being folded into the group.

A Heavy Armored Operator, Montagne comes equipped with his Extendable Shield, "Le Roc", which can fully cover him from head-to-toe while standing, providing extra protection that no other shield in the game offers. This also allows him to be the ultimate point-man, blocking enemy bullets as allies attack from his protection.

Le Roc was first issued in the late 1980s. A composite of reinforced alloys and Kevlar, its sturdiness and well-designed collapsible feature has made it a staple in GIGN operations for nearly thirty years.

Touré’s shield is the only original Le Roc still in service. Though it has seen its fair share of conflict, the device has become an extension of Touré, having saved his life and members of his team on multiple occasions. It will most likely remain on active duty until Touré retires. 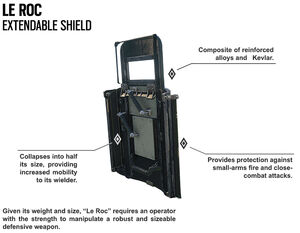 Gilles Touré's Extendable Shield was one of the first pieces of equipment to arrive for evaluation. Le Roc's heavy black surface is covered in deep battle scars and definitely stands out against our R&D facility's pristine labs. According to Pulse (Specialist Jack Estrada), it was like the Monolith from 2001: A Space Odyssey had landed. I didn't understand this reference until he linked images from the movie - he's right!

Having Monty participate in some of these control tests has given us a better perspective of what he's up against (and what he puts others up against). The shield has some modifications in the past and we have a solid list of adjustments we may want to consider eventually. For now, Montagne's skill with the Extendable Shield has always been solid. As long as Specialist Touré has good support and communication with the team, Le Roc will continue to do its job as designed.

Hip Aiming a P9 with the Le Roc Shield

Aiming Down the P9 over the Le Roc Shield

Montagne's concept art (without his shield) 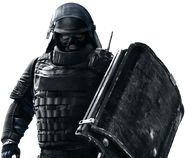 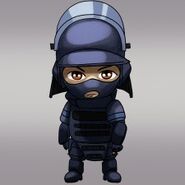 Montagne with his shield (In-game screenshot)

Montagne in the Bushido Set 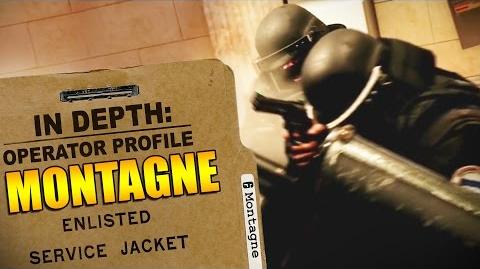