Chandar was born on October 11, 1991 in York, England. An exceptional and well-rounded student, he graduated from secondary school at the age of twelve. During his gap year he completed an internship at a prestigious British tech company where he contributed to the design and function of security system prototypes. At age fourteen, he was accepted into the Department of Engineering at the University of Cambridge where he majored in electronics and computer engineering. He later earned a Bachelor of Science and Engineering and a PhD in Electrical Engineering.

His ingenuity caught the attention of Britain's national security office, the Government Communications Headquarters (GCHQ). Having demonstrated acuity in code breaking, Chandar became an intelligence officer within the signals intelligence (SIGINT) unit. This experience proved to be valuable with his eventual recruitment into the SAS and later Rainbow. He continues to contribute to the applied technical research team and has recently expanded his field of study to include learning Korean.[1]

Chandar is highly intelligent and analytical. He is used to being the youngest and smartest one in the room. A man of few words, he prefers brevity and clarity to extemporizing. His curt nature is easily misconstrued as rudeness.[2]

It may not be immediately clear why Specialist Mark Chandar's codename is Mute. While he dislikes small talk, he isn't particularly reserved and in fact can be brash - a trait that is off-putting to some. Whatever social agitation he experiences, there are some indications that he's unable to shake it off. I suspect it's because he's impatient. He needs to appreciate theat there are different approaches to solving a problem. Interestingly, Specialist Mike "Thatcher" Baker seems begrudgingly tolerant of him and has been known to speak up in Chandar's defense. […]

Chandar tends to gravitate to certain personalities. In particular, I've noticed that he's been interacting with Specialist Timur "Glaz" Glazkov lately. Because Chandar revels in deconstructing equipment to create something new, I think he's drawn to abstract thinkers and Glazkov has a similar talent for seeing complex situations in a unique way. […]

Given his background in information security, Chandar understands secrecy and seems uncomfortable with expressing himself or with personal questions. In his field, and here at Rainbow, information is a critical - life and death - commodity. So of course, I respect this but only up to a limit. I had to find another way in and we managed to find common ground in discussing History, of all things!

For someone so focused on science he surprised me. His hometown of York is one of the most historic cities in England and it's a city I adore. He described in wonderful detail how he had to pass the Gothic church on his walk to school. He like to lean back and look up at the bell tower for so long that it made him wobbly. […] My meeting with Chandar reminded me that we here at Rainbow tend to focus on how our operators excel in the STEM fields, but there is great value in our operators having passion and interests across a broad spectrum of studies. Chandar demonstrates why he's much more than someone who is used to being the smartest person in the room. Despite his young age, I'm certain he has something to teach the others.

Developed by Britain’s Government Communications Headquarters (GCHQ) the “Moni” was originally designed as a portable device that could blackout any radio transmissions or communication devices for covert or sensitive meetings between British government officials and foreign interests. As one of the primary engineers on the project, Chandar created a variant of the device that doubled the effective range of the original GCHQ signal disruptor. 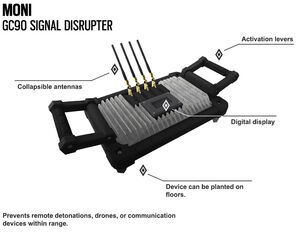 Rainbow Director Harishva (Six) Pandey and Research and Development Director Elena (Mira) Alvarez have made these evaluations a top priority. I was asked to review the GC90 Signal Disruptor alongside Specialist Chandar. He's invested many years researching defense systems and GPS-Reliant Military Systems. Really he's the expert on the subject.

Specialist Chandar and I put the GC90 "Moni" Signal Disruptor through a number of interior and exterior scenarios. The key focus was to test jamming signal parameters based on several constraints while keeping the device's weight to a minimum.

Regarding the attached evaluation results... Specialists Weiss and Pichon (IQ and Twitch) made repeated requests to review the data because both have devices that are powerful counters to the Moni. I didn't want to be uncooperative but I wasn't clear on the protocols. Mute wasn't granted access to the IQ Red MK III results "until Director Alvarez had seen them." So Mira, I'm leaving it for you to decide.

Retrieved from "https://rainbowsix.fandom.com/wiki/Mute?oldid=60262"
Community content is available under CC-BY-SA unless otherwise noted.