"The only thing I feel when I pull the trigger is recoil."
— Nøkk

For reasons of National Security and currently active missions, Karina Gaarddhøje's records are sealed at NATO's confidential security clearance, but her files have been released to Six. Gaarddhøje enlisted at the Army NCO School in Sønderborg, then enrolled at the Royal Danish Military Academy where she graduated at the rank of First Lieutenant. With four deployments under her belt, Gaarddhøje underwent additional special operations training, earning her Jægerkorpset maroon beret with skills in covert ops, combat search and rescue, direct action, special recon, arctic warfare, and advanced breaching. Gaarddhøje served in Afghanistan and Iraq, often alone in deep undercover behind enemy lines. She received commendations for eliminating hostile insurgents in surgical strikes and was responsible for uncovering Erik "Maverick" Thorn's location, forwarding that intel to the Unit.

Gaarddhøje keeps her identity hidden from all but her fellow operators. NATO's O&P division recommended Gaarddhøje for Rainbow as one of its deep cover specialists.[3] She was subsequently recruited into Rainbow in 2019.

In the summer of 2021, Mina "Thunderbird" Sky was recruited into Rainbow from a recommendation by Sanaa “Nomad” El Maktoub. Unconvinced that Thunderbird was up to the task, Gaarddhøje sought to test her. She cut the hydraulic line for the landing gear of one of Rainbow's CC-295s and lodged a necklace she had stolen from Thunderbird into it. She then lured Thunderbird to the hangar by writing a note mentioning the issue and making it appear as if it was from Nomad. After Thunderbird recovered her necklace, Gaarddhøje opened fire and hit her in the leg. As Thunderbird managed to reach cover, she started to taunt her by rehearsing a nursery rhyme. While Gaarddhøje was searching the hangar, however, Thunderbird released smoke and flanked her. Before she could react, Thunderbird struck her in the head and knocked her to the ground.

While trying to recover, Thunderbird told her that she knew something was off as Nomad had terrible handwriting ever since she received frostbite in the Canadian wilderness. Dazed, Gaarddhøje told of how she did not trust Nomad's recruiting intuition. Thunderbird then placed a bandaid on Gaarddhøje's head and helped her up, revealing she held no hard feelings for what had happened. As a result, Gaarddhøje apologized and said that while she trusted Nomad herself, she wanted to know that Thunderbird was capable of handling more than "war games". Thunderbird said she understood but asked Gaarddhøje to leave their aircraft alone the next time she wanted to test her.

When they looped me in on Nøkk's real identity, I cracked open her secret dossier with schoolboy glee. I love a good mystery and I was not disappointed. Nøkk's real identity has been a prickly issue given the potential scandal should it ever be made public. Frankly, had I not known who Nøkk's father was, I wouldn't have noticed the family resemblance. But it smacks you in the face when you know the truth.

I wondered how Nøkk felt about all this and how it influenced her upbringing. Nøkk tried to dismiss it as one of the realities of the job, but eventually I learned enough to start painting a portrait. Nøkk's mother raised her, and the pair are close to the point of being best friends. It's almost tribal how protective they are of each other. Nøkk knew about her father and his family, but it took a while before the family knew about Nøkk. They tried to give Nøkk a better life, but without bringing her into the fold out of fear of courting a major scandal for the family.

Nøkk is fiercely loyal to her mother, so I found it surprising Nøkk was loyal to her father out of respect for the family name itself. You'd think there'd be some resentment there, but Nøkk is comfortable quietly serving Queen and Country and everything else that falls under the umbrella; her Darwinist outlook isn't rooted in her own safety, but rather the betterment of the soldiers of her unit and her country.

Nøkk's ability to keep a secret and maintain a façade is what makes her a highly capable undercover operative but she is involved in an active mission. Fortunately, Nøkk's cover identity is currently “in jail,” building up credibility while giving us an incredible opportunity to work with someone of Alibi's and Bandit's caliber. I have no doubt Nøkk is a strong fit for Rainbow, and I hope we can use her to the full extent of her stay with us.

A Medium Armored Operator, Nøkk's unique gadget is the HEL Presence Reduction Device, a gadget that when activated, dampens her sound and erases her image from cameras. This, however, comes with some limitations.

"Counter-intel that wipes Nøkk's image from observation tools and reduces her noise, with exceptions."
— In-game description

Nøkk's gadget is the ultimate form of stealth technology. The HEL is a glove attachment, which, when activated, reduces her ambient noise output and hides her image from the opponents' observation tools. Drones, Bulletproof Cameras, Evil Eyes and more will thus be unable to register Nøkk's presence as she roams through the map, unseen. Her footsteps will be silenced as she stalks opposing operators, unheard. Roaming will be riskier than ever for Defenders, as Nøkk could be hiding behind every corner or worse, sneaking up right behind them. Keep in mind that the HEL has a limited window of usage, and must otherwise be recharged through a cooldown.[1]

Since I was involved in coding Specialist Chul Kyung "Vigil" Hwa's ERC-7 device, I was asked to prove Specialist Nøkk with a next-generation version. It was a little outside my domain, but I love a challenge and I was inspired by her abilities as a hunter and stalker.

The ERC-7 scans surrounding devices to wipe the user's image form cameras and drones, but I decided to add a meatspace component using an active noise control unit inspired by our own Specialist Taina "Caveira" Pereira's 'light step' (please don't tell her I said that). The device, codenamed HEL Presence Reduction, uses an antiphase signal at the same time as the ERC-7 to create destructive interference to mask out Specialist Nøkk's footsteps. In other words, it allows her to move relatively silently.

However, like the ERC-7, it does have its limitations. Running or making certain arm motions is going to give the system some trouble as it tries to sanitize the user's image from nearby cameras in real-time. Until I can gather more data from tests in the field, Specialist Nøkk is as close to being a ghost as we can currently get. 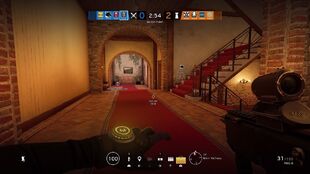 Nøkk under the influence of the HEL Presence Reduction 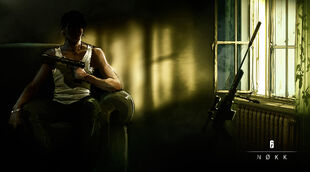 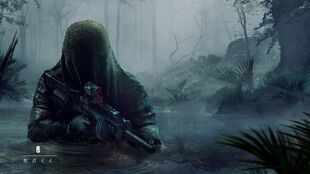