NATO Summit is the thirteenth mission in the PC version of Tom Clancy's Rainbow Six: Lockdown. Its console counterpart is Operation Red Scythe.


Nicolai Yazhov revealed that the October Resistance has a plan to attack the world leaders attending the NATO Summit. A bomb containing a deadlier strain of Legion could be on site. The terrorists plan on detonating a Legion bomb via satellite uplink. Secure Summit building, disarm bomb, and extract hostages.

Once extracted from Marseilles, Yazhov revealed that his former terrorist organization, the October Resistance, planned to attack the NATO Summit in Barcelona and release a new and more deadly strain of the Legion virus. Yazhov believes that the terrorists were planning to remote detonate the virus bomb with a satellite uplink. While we were interrogating Yazhov, the terrorists made their move so our window of opportunity is closing quickly. Your orders are to secure the building, disarm the bomb, and get hostages to safety. If you fail, the world's most powerful countries will lose their elected leaders and anyone inside the building will die. Chavez, you'll be taking Murad, McAllen, and Yacoby. Rainbow Six out. 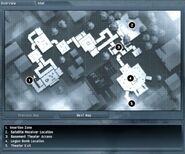 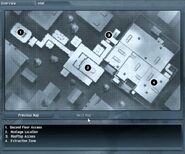 NATO Summit Mission Walkthrough
Add a photo to this gallery
Retrieved from "https://rainbowsix.fandom.com/wiki/NATO_Summit?oldid=67254"
Community content is available under CC-BY-SA unless otherwise noted.