"This playlist is reserved for new players to help them learn the basics of Siege. Play on classic maps most representative of Siege's core gameplay."
— In-game Description

Newcomer is the beginner playlist for multiplayer in Tom Clancy's Rainbow Six Siege that was introduced in Operation Burnt Horizon and expanded upon in Crimson Heist. Unlike Quick Match or Ranked, it is only available for players under level 50. 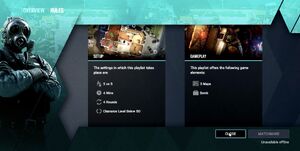 The Newcomer playlist features six available maps. This is a list of maps currently available as of the Demon Veil expansion.