Operation Arctic Zebra is the second mission in Tom Clancy's Rainbow Six: Covert Ops Essentials. The multiplayer version of the level is Ice Base.

Two days ago, a malfunctioning Russian spy satellite made a soft landing near an international Arctic Circle Research Station. The scientists there were able to recover much of the satellite intact and bring it back to the station. Shortly thereafter, all contact with the station was lost. Subsequent aerial scans of the area reveal evidence of a large armed force now in possession of the station.

John Clark - This mission has RAINBOW written all over it. The group holding the station is a Vladivostok-based mercenary outfit with ties to Beijing. Their plan appears to have been a quick strike to recover sensitive satellite data on the Sino-Russian border, but a violent snowstorm bogged down the operation and kept their helicopter reinforcements grounded.

Keep it fast and sharp. You don't have much time before those reinforcements show up.

Kevin Sweeney - You're going to be inserted by a converted American boomer sub pushing up through the ice pack a few hundred meters outside the station. You've got to hit the station fast and hard. You should catch them by surprise, but that won't last long. Your obvious mission is to rescue the surviving scientists, but that's not all.

Under the cover of rescuing the prisoners, we need one of your operatives to replace a key data module of the satellite with this falsified data module. We can then track the bad data all the way back to whoever paid for it.

This mission requires action and planning. The hostages and the satellite are both somewhere in the main building. Expect the hostages to be guarded, so get them first. Don't let any opponent see the team manipulating the satellite. 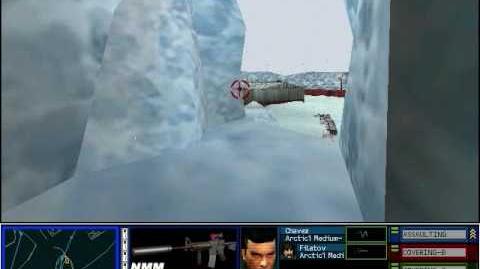