Start a Wiki
watch 02:27
The Loop (Games)
Do you like this video?
For the remake of the mission, see Operation Aztec Palace (Critical Hour).

Operation Aztec Palace is the third mission in the Urban Operations expansion of Tom Clancy's Rainbow Six: Rogue Spear. The multiplayer version of the level is Canals of Venice.

Members of an apocalyptic cult have seized control of a Venetian library housing a collection of rare medieval manuscripts. They have planted bombs in the building that we believe are set to detonate within the hour. Your mission is to regain control of the library and prevent the bombs' detonation.

John Clark - The group holding the library call themselves Universal Harmony. They're mostly American - a fringe New Age cult of New Mexico. Apparently they believe that one of the books in the Alberti collection has some sort of mystical significance. They haven't issued any demands, but our surveillance indicates that they've set explosives in the building. Intel thinks we may have a mass suicide in the making. Our job is to retake the place before they can blow it up.

Kevin Sweeney - They let the library staff go a few hours ago, so you won't have to worry about hostages. Frankly, the biggest danger you'll face will be premature detonation of the explosives; it's vitally important that none of the cult members be allowed to raise the alarm.

Terrorists are threatening to destroy a historic library in Venice. Your mission is to neutralize all terrorists before they can detonate their bomb. To regain control of the library you'll need to choose a single route of assault. There are several ways in: The main entrance to the square across the bridge, the small bridge over the canal that extends from the mall area, and the underground canal entrance. The bomb is located in the center of the library, downstairs. Since there are no hostages, you're primary objective should be to secure the bomb and then proceed to eliminate the remaining threats. 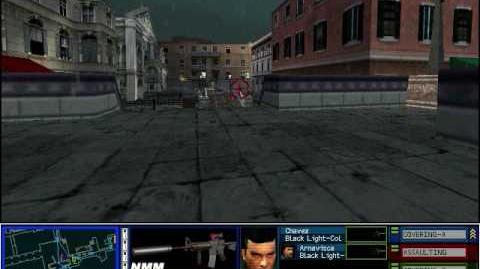 Universal Harmony member
Add a photo to this gallery
Retrieved from "https://rainbowsix.fandom.com/wiki/Operation_Aztec_Palace_(Urban_Ops)?oldid=64522"
Community content is available under CC-BY-SA unless otherwise noted.