View source
watch 02:52
Roblox: DeepWoken - The Loop
Do you like this video?
Play Sound
For the remake in Critical Hour, see Operation Black Star (Critical Hour).

Operation Black Star is the fourteenth mission in Tom Clancy's Rainbow Six. The multiplayer version of the level is Amazon.

Anne Lang is in Brazil on a Rainforest 2000 fact-finding tour. Horizon computer files have revealed that the Phoenix Group is planning to fake her abduction to allow her to go into hiding before the Brahma virus release. Your mission is to prevent this event and take Dr. Lang into custody.

John Clark - Remember Calderon -- that drug trafficker we took out? Anne set him up. There never was any trouble between him and the Rainforest 2000 people -- that was a Phoenix Group smokescreen to hide their real plan: using Rainforest 2000 as a cover to build a sanctuary to survive the pandemic. The Horizon Ark isn't just an experiment in building a self-contained ecosystem -- it's bomb shelter for biological warfare.

Remember to plan carefully who you take to Brazil. We've still got work to do in Australia.

The Phoenix Group has raided a research station in Brazil and taken a group of Rainforest 2000 VIPs hostage. Intelligence indicates that this raid is intended as cover for Anne Lang's disappearance. Surveillance has revealed that Lang is waiting with her "captors" in the main building while the other VIPs are being held in a nearby prefab. The terrorists are waiting for reinforcements to arrive before killing their hostages and moving Lang out to a safe location.

Your team will be inserted by inflatable boat upriver from the station.

RAINBOW responsibilities in Australia will require that your other team begin operations before this mission is completed. Be advised that any team members sent on this mission may be unavailable for other missions in the near future and plan accordingly. 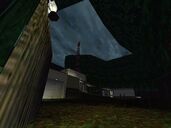