Edit
watch 04:03
Wiki Targeted (Games)
Do you like this video?
Play Sound
For the remake of the mission in Shadow Vanguard, see Operation Blue Sky (Shadow Vanguard).

The Phoenix Group has struck again, taking over a dam and setting explosives. An informant within the dam, Roland Kunst, has contacted RAINBOW and an agreement has been arranged to spare Kunst's life in exchange for valuable information about the Phoenix group. Kunst is unguarded and is hiding, but terrorists won't be afraid to shoot him if they spot him with RAINBOW operatives. Explosives may be present. These must be disarmed.

John Clark - The informant is a college kid named Roland Kunst who's finally figured out he's in over his head. According to the limited information we've received from him there's an American wing of Phoenix that we've never heard of, and they've gotten their hands on some sort of "super-germ". He says they're planning an "action" using this germ some time next month. Whether the dam gets blown or not, we need Kunst.

Catherine Winston - I'm not going to pretend to give you advice on how to save a dam. After seeing how you got me out of that situation in the Congo it's obvious you know what you're doing. This informant of John's says he knows about a plan to release a biological agent into the general population. That's very scary. In 1979 a small, accidental leak of military-grade anthrax killed 68 people in the city of Sverlovsk. Today, a well-orchestrated release of a bug like that in an urban area could kill thousands ... maybe millions.

The Dam consists of many floors, making this a difficult mission. Members of the Phoenix Group are just as difficult as they were in Operation: Angel Wire, but there are a large amount of terrorists. On veteran and elite, bombs must be disabled. On any difficulty, the informant, Roland Kunst, is hiding in a room. Phoenix will not be afraid to kill him if they spot him with RAINBOW. Bombs are present on all difficulties, and although you do not have to disarm them on recruit, they can still be set off by a radio switch.

RAINBOW must rescue Roland Kunst at all costs. On recruit, RAINBOW is easily able to sneak in and escort Kunst to the extraction point, only needing to kill a few terrorists, but bombs may still be set off. On veteran and elite, the bombs must be disarmed. There are a total of 3 bombs. However, there is only one radio switch to activate them. If RAINBOW guards the switch, some other team members can easily disarm the bombs. It is suggested that the player rescue Kunst before attempting to disarm the bombs. If the player successfully completes all objectives, an image of RAINBOW operatives disarming a bomb appears, with a few dead Phoenix Group members nearby. If the player fails however, an image of the dam appears. There is an explosion on the dam, and several cracks appear as well. Water is shown spraying out of these cracks and holes, and a Phoenix Group member is seen on the dam.

The Phoenix group are no more difficult than they were in the third mission, but they are much more abundant. They won't be afraid to kill the informant if they see him with RAINBOW operatives. This mission is difficult due to the several patrolling enemies. However, since the dam is so large, un-silenced weaponry does not cause Phoenix to go for the radio detonator, possibly because they can't hear you. Terrorists patrol tunnels and catwalks, often guarding chokepoints and easily having the potential to wipe out RAINBOW operatives from the catwalk. Stealth is key to escaping the terrorists. It is suggested that the player eliminated all terrorists in order of descending floor level. (ex: clear top of dam, then proceed to floor level below that.) The terrorists have no armor except their helmets, which provide little to no protection. Long range, un-silenced weapons are suggested (M-16 and CAR-15)

BUDAPEST, HUNGARY (United News International) - An attempt by terrorists to destroy a dam on the border between Hungary and Slovakia was foiled Tuesday afternoon by members of the Hungarian Police Special Force (PSF). According to a spokesman for the Hungarian government, the terrorists seized control of Esztergom Dam on Sunday morning to protest the environmental effects of it's construction on the dam and the adjoining hydroelectric power station and threatened to donate them if their demands were not met. When negotiations broke down early Tuesday morning, the police decided they had no choice but to retake the dam by force, the spokesman said.

All members of the group holding the dam were killed during the assault. Police believe that this attack is connected to a similar assault on an offshore drilling rig in North Sea three months ago.

Recent intelligence gathered by RAINBOW indicates that Phoenix is operating within the continental United States and well as Europe. The full size and scope of this operation is unknown. Their activities have been traced to a remote compound located in the countryside near the city of Twin Falls, Idaho. Records obtained from laboratory supply houses indicate that that this compound has been equipped with a Level 4 biological containment facility. This information, coupled with additional intelligence obtained from a RAINBOW informant, suggests that Phoenix has gained access to a potentially lethal biological agent. Given their recent history of violence, it must be assumed that they are prepared to use this agent against a civilian or military targets.

Roland Kunst as he is found inside the dam. 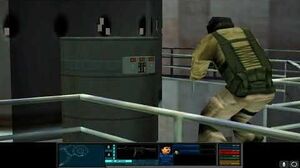