Start a Wiki
watch 01:31
The Loop (Games)
Do you like this video?
For the original mission in Tom Clancy's Rainbow Six, see Operation Blue Sky (Rainbow Six).

On the border between Slovakia and Hungary

The Phoenix Group has seized a dam on the border between Hungary and Slovakia and is threatening to destroy it. One of the terrorists is willing to turn informant in exchange for his life.

James Danko - Congratulations, Alpha Team. You not only achieved our objective in Brazil, you also scored the biggest drug interdiction in South America in five tears. But we can't rest on our laurels. Phoenix has seized a dam on the border between Hungary and Slovakia. They're threatening to blow it up.

Control - After Slovakia unilaterally decided to divert the flow of a 40 kilometer stretch of the Danube to its own territory, tensions have ratcheted up considerably. Between environmentalists and hardliners on both sides, a lot of people would love to see this dam go away. But if it goes Phoenix's way, the results will, needless to say, be catastrophic.

James Danko - As a result of this latest action, we now have an informant inside Phoenix, a college kid named Roland Kunst who realized he's in over his head. He's given us limited information so far, but he claims there's a Phoenix cell operating inside U.S. borders that we know nothing about. And apparently they got their hands on some kind of biological WMD and they're planning to use it within the next month. Whether the dam is destroyed or not, we need Kunst. Let me bring Doctor Winston into this conversation.

Dr. Winston - Biologicals haven't been used much since World War 2, but to give you just one example: In 1979 a small, accidental release of military grade anthrax by the Soviets killed sixty-eight people in the city of Sverdlovsk. A well-orchestrated release of a bug like that in an urban area could kill thousands... even millions.

James Danko - You will insert on the Slovakian side of the Danube river. Surveillance indicates that explosive devices have been placed inside the dam. If Phoenix is alerted to your presence, they will detonate these devices using triggers scattered throughout the area. Once you're in, we'll arrange for you to contact Kunst, defuse the explosives, and extract with Kunst. Good luck, Alpha Team.

Alpha Team on the dam 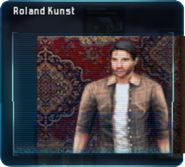