Routine aerial surveillance of American missile silos in North America revealed that a single silo in North Dakota had had the solid concrete blocks removed, in violation of international treaty. Federal investigators arriving to inspect the abandoned station were driven back by automatic gunfire.

John Clark - The American government is desperate to avoid another armed standoff with disgruntled terrorist militiamen, so they're playing it cool for now. The militia has aggressively defended its visible perimeter, so there's no picket line in sight. Make no mistake, though, these guys are pinned down, and they know it.

You're not going to like the insertion on this one. Your team will make a black parachute pre-dawn HALO drop into the perimeter. Secure yourselves in an empty building until dawn breaks, and then hit them like a hurricane. America is letting us play ball on her turf, so don't make any mistakes.

Kevin Sweeney - The leader of the so-called militia calls himself Son of John Brown. He claims that if the U.S. government does not reveal the extraterrestrials in its ranks, he will detonate the nuclear warhead. The government is telling the media it won't escalate the situation with a madman who cannot override the safety locks.

The real story is very different. We picked up an encrypted high-frequency carrier signal coming out of the bunker. Analysis indicates that highly classified missile details are being broadcast outside the U.S. I'll bet that, once the transmission is finished, the 'madmen' will come to their senses and surrender. You've got to cut that data stream now. In all likehood, the targets inside the silo are not angry average Americans but highly trained mercenaries.

Federal troops have secured the perimeter outside visual range. The deployment zone, while secure, is far away from the main base, with many meters of open ground between buildings. 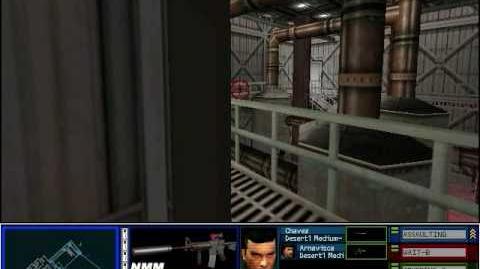