RAINBOW is authorized to search the estate of Nikola Gospic for evidence of more chemical weapons. Intel believes he is still in possession of a highly lethal blistering agent, which he will attempt to use. Your mission is to prevent the destruction of evidence on Gospic's computer and to secure the estate using all necessary force.

John Clark - Gospic has gone to ground, which just makes him more dangerous. He's found himself a hole somewhere and we're going to have to dig him out. We start with his mansion on Cayman Brac. It's highly unlikely he's there, but his stash of blistering agent might be. At the very least, Intel wants to go over that place top to bottom. If we're lucky, they'll be able to figure out what he's got left, and where he's going to hit next.

At this point you should be familiar with the layout of the estate. We don't have any hostages to worry about this time, which is a bonus, but it also means that all resistance isn't going to be bottled up in the main house.

Kevin Sweeney - We've traced the origin of the VX ingredients you confiscated in Pilar. It's old Soviet manufacture, smuggled out by Preston. We've even managed to pinpoint the buy at which he got it. Unfortunately, it's not all he picked up on his little shopping trip. In addiction to the VX, he got the compounds necessary to home-brew more of the stuff and what we are pretty certain is a blistering agent. You nicked the former when toy hit the import-export firm in Porto Alegre, but the blistering agent's still out there. So's Gospic, for that matter, and Gutierrez along with him.

The blistering agent we're looking at is most likely phenyldichloroarsine, a colorless, odorless liquid. It does a number on the eyes, lungs, skin and guts of anyone who's exposed. It's slightly less effective than so-called mustard gas, the grandfather of blistering agents, but that's about the only good thing about it. By the time symptoms of exposure appear, it's already done its work.

Your mission is to prevent the destruction of evidence on Gospic's computer and to secure the estate using all necessary force. Resistance should be more organized that the last time you were here, so stay on your toes. Hitting the place from the rear should provide you with an element of surprise.

CAYMAN ISLANDS (United News International) - Once again, the island of Cayman Brac was rocked by gunfire, as a combined force of police and British SAS troops raided an estate that local officials claimed was a hub for a narcotics ring. "We have reason to believe," said Cayman Islands government spokesman Joseph McFayden, "that the house has been used as a relay station for the illegal narcotics trade for some time, and the evidence that has been retrieved in the wake of this morning's efforts supports that view."

Police reportedly seized over a thousand kilos of cocaine in the raid, as well as a small cache of automatic weapons and what authorities believe was equipment for setting up a drug refining operation.

McFayden refused to answer questions as to whether the house was the one which Cayman police had raided earlier in the year, but independent sources near the police commissioner's office confirmed this was the case. 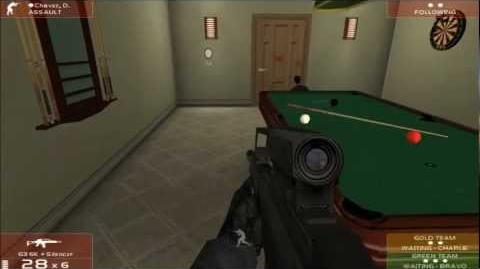