Operation Broken Sceptre is the eighth mission in the Black Thorn expansion of Tom Clancy's Rainbow Six: Rogue Spear. The multiplayer version of the level is Hotel.

After arriving in Milan, Italy for a conference, the United Nations' Secretary-General, Lord Nigel Cameron, was taken hostage by operatives believed to be working with Newcastle. Cameron was captured in his hotel just prior to leaving for the conference, and is being held along with some of the hotel staff. Your mission is to rescue the UN Secretary-General and the other hostages.

John Clark - Newcastle is getting desperate. An operation like this is extremely risky, and four Italian police officers have already been shot. This has the logical government howling for blood. We're going to have to move fast before someone decides to take matters into their own hands. The only reason the Italians haven't already made an assault is that the UN is holding them back. The Italians did a nice job of extracting Brig. Gen. Dozier from that apartment building in Padua a few years back, but this situation is a lot touchier, especially with the local casualties.

Make sure the Secretary-General survives without injury. He has been the key factor in the current round of talks between the United States and China, and losing him would be a major setback. You don't need to be reminded how fragile those talks are. The bad news is that Newcastle himself doesn't seem to be on the premises, but odds are that he sent some of his very best people to handle this. Getting Cameron out past them would be a slap in the face to Newcastle.

Kevin Sweeney - Further research on Newcastle's activities has come up with a fairly accurate picture of what he's been up to since washing out of the SAS. He's been working as a mercenary, taking contracts from around the globe. The bulk of his work has been in the Middle East, but he's taken work from all comers. Our best guess is that he's been using the work to bankroll his attempts to stockpile weapons and resources in order to take revenge on Rainbow. Now, it seems, he feels like he's in a position to stop preparing and to act instead. I don't need to tell you how high the stakes are now. A blunder on this one and Rainbow could be exposed, discredited and disbanded - and that's exactly what Newcastle wants. He's forcing us into these high-profile situations, and it's not a tenable place for us to be. If we don't catch Newcastle soon, the odds just might catch up to us.

As for UN Secretary-General Lord Cameron, he's been mediating the current round of conflicts between the American and mainland Chinese governments, trying to maintain peaceful relations. His efforts have kept a bad situation from getting worse, and without him, we might well be headed for another Cold War.

Teams will be inserted from both sides of the hotel, so that the 2 buildings can be taken simultaneously. The hotel employees are being kept on the third floor in the primary building, while the Secretary-General has been taken to the second floor of the secondary building. Presumably, he is well guarded. Watch for guards patrolling the corridors and especially for gunfire between the two buildings.

MILAN, ITALY (United News International) - In a late-breaking story, Italian security forces stormed a small hotel in Milan where the United Nations' Secretary-General was being held hostage by radical extremists. The terrorists were determined to disrupt this week's international culinary arts conference, at which Secretary-General Lord Nigel Cameron was to the keynote speaker. Speaking immediately after this rescue, the Secretary-General praised the bravery and skill of the Italian soldiers, and expressed his sympathies for the families of the four local police officers who were killed in the incident. He also denied rumors that the conference would be cancelled, and stated flatly that "the strong spirit of international cooperation as exemplified by this gathering is precisely the sort of thing that can overcome the urge toward senseless violence and terrorism." 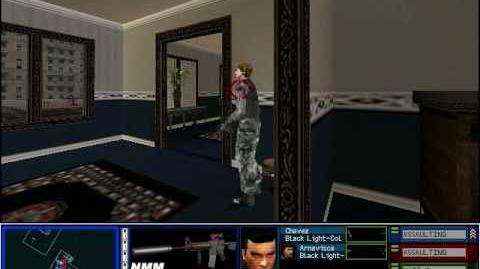 Copycat Terrorist armed with AK47
Add a photo to this gallery
Retrieved from "https://rainbowsix.fandom.com/wiki/Operation_Broken_Sceptre?oldid=65901"
Community content is available under CC-BY-SA unless otherwise noted.