Operation Coarse Blade is the fourth mission in the Black Thorn expansion of Tom Clancy's Rainbow Six: Rogue Spear. The multiplayer version of the level is Jungle Camp.

An unknown terrorist group has captured United Nations peacekeepers in Nigeria and is holding them hostage in their jungle-based camp. The terrorists are heavily armed and well prepared, and they are most likely expecting an assault from foreign forces. Your mission is to neutralize their anti-aircraft weapons, liberate the hostages, and capture the group leader alive so that he can be interrogated.

John Clark - It seems that our terrorist group has gotten comfortable in Africa. All of their other attacks have been extremely clean, and this one looks like no exception. We need information on these groups and we need it now. A recon team located the most likely candidate for leader of this particular group. We need to capture him alive - a thorough interrogation should reveal what these terrorists actually want - as opposed to the rather scattershot demands we've been getting.

This operation will need to be an all-out assault on the revolutionaries' jungle base camp. The terrorists are heavily armed and their base is well protected. We'll need to get the hostages out by air, so taking out their anti-aircraft emplacements is extremely important.

Kevin Sweeney - Peacekeeping convoys in this area are often attacked for their vehicles and weapons, but it's rare for the guerrillas to take hostages. An attack exactly like our current situation took place in September of 2000, when a group demanding the release of their imprisoned leader held 11 UN peacekeepers hostage in Sierra Leone. Intelligence has concluded this to be yet another reenactment of a previous terrorist crisis, but the motivation behind this and the other attacks remains a complete mystery. Our only hope is that if we get our hands on their leader, we can get some answers.

Rainbow teams inserted on the southern bank of the river will have to secure the anti-aircraft artillery and rescue the hostages. Two other teams will be inserted and they will capture the leader and escort him back to the rendezvous point, where a rescue helicopter will be waiting. From the reports of the hostage-taking operation, we can expect these terrorists to be well armed. Heavy fire is expected.

NIGERIA (United News International) - Breaking news from Nigeria indicates that there may be a resolution to the week-old hostage crisis there. According to sources in the Nigerian State Department, government troops moved in this morning and seized the camp where UN Peacekeepers were being held by radical separatists. Details of the action are still sketchy, but it appears that the Nigerian troops neutralized the terrorists' anti-aircraft emplacements before rescuing the hostages. Unconfirmed reports indicate that all of the terrorists were killed during the fighting, and that they refused to surrender. The hostages have been airlifted to safety in the capital city of Abuja, and a formal statement from the Nigerian government is expected shortly. 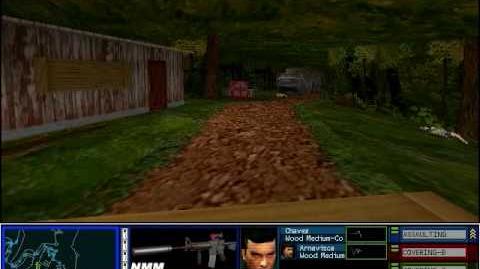