Terrorists have taken hostages in the village of Lamoura, Switzerland. Among them are several delegates to the current IMF conference in Geneva. Swiss security forces have sealed off the area in preparation for your arrival. Your mission is to liberate the IMF delegates.

John Clark - Normally we'd leave something like this to the Swiss authorities, but the profile of the hostages is high enough that we've been called in. There were at least five IMF conference delegates present in the village when it was stormed. I say "were" because we don't know how many are left alive. The terrorists hit the local bank first, then rounded up hostages when they realized they were pinned down. They've issued a few demands, but they haven't identified themselves.

Something about all this stinks, but figuring out what is Intel's job, not yours. Yours is to go in there, clear out that village and make sure both the delegates and the locals who've been taken hostage come out in one piece.

Kevin Sweeney - There's something odd about this operation. At first, the terrorists seemed unaware of the identity of their captives, as though they'd been planning to hit the town anyway and the presence of the IMF officials was a lucky accident. Apparently the delegates were taking a day's ski trip away from the conference in Geneva. They'd have been better off if they'd kept their minds on business. Still, there's something here that doesn't make any sense. There's certainly nothing else in Lamoura worth mounting an operation like this over.

Your mission is to liberate the IMF delegates. The hostages are being held in two separate places marked on your map and are under heavy guard. The terrorists have been alerted to police presence and snipers are probably already waiting for you, so watch out for open areas.

RAINBOW only has one insertion zone. They deploy from the highest point in the village, to the West. This allows the team to access a house nearby through 2 doors, or enter the center of the village through 2 stairs.

The extraction zone is at the bottom of the village, to the East near a house.

The Alpine Village is composed of 2 houses, the City Hall, a 2 floor shack and the big outside area. The 1st house is the closest to the insertion zone, and it is the biggest of the houses. It is a 2 floor house with multiple windows that allow anyone inside to guard the center of the village through 2 different directions, the front and side ways of the building, as well as the back and side entrances. This shack is guarded by 2 tangos, one of them a sniper. The second floor has a single window that provides highground over the center of the village. The house allows direct access to the center of the village through a door on the lower level, or to a path that leads to the basement of the City Hall, the 2nd house and the Extraction Zone via a back door, through a small attached building. This building usually has 2-3 tangos guarding the front area, with 1-2 guarding the back.

The City Hall is the biggest building in the map. It consists of 2 floors and a basement level. It has a small shack connected to it by the second floor, which allows overwatch on the path to the back entrance to the Hall, as well as the 2 floor shack. The main area of the Hall contains multiple seatings, as well as a 2nd floor that overlooks the 1st floor, making it a dangerous and easily defendable room. The basement level is composed of 3 rooms. The first, and biggest, room connects directly to the main Hall and to the room behind the hall. This room can be accessed from the side or the back of the building. The second room is connected to the back entrance of the Hall and to the first room. The last room is the back entrance to the City Hall, and can be easily covered from the 2 floor shack. This building is heavily guarded. It usually contains from 4 to 5 tangos in the main Hall, who guard a hostage. Additionally, it has 2 tangos guarding the first basement room, as well as 2 more guarding the second room, along with a hostage.

The 2 floor shack can be accessed by walking down the path that is north of the City Hall. It allows overwatch on the back entrance to the City Hall, as well as the path north of it. It is guarded by 2 tangos, one of them a sniper.

The final building is the 2nd house, on the bottom of the hill to the East, close to the extraction zone. It is a small, 2 floor house that can be used to guard the extraction zone, the path from the 1st house's attached building to the City Hall basement, and the path East of the City Hall from a window in the bedroom, and multiple shutter windows on the 2nd floor. It is guarded by 3 tangos, one in the bedroom, one in the small kitchen of the house, and the other in the top floor.

Since the objective is to rescue hostages, the element of surprise is essential. Therefore it is recommended to equip suppressed weapons and quietly and methodically approach the hostage rooms. Most of the map is in close quarters combat, making SMGs and pistols the prefered choice for moving indoors. Since most of the map is covered with fog that prevents from seeing at long ranges, it is ill-advised to bring snipers, as their long range advantage is nullified by the fog and darkness of the night. However, sniper rifles can still be usefull if equipped with Thermal Scopes, allowing an operative to provide intelligence on the tango's location, or even neutralizing them through the walls. It is critical to enter the hostage rooms with distraction devices, such as breaching charges, tear gas, smoke grenades or flashbangs to distract the hostiles and prevent them from killing their captives. This also makes them easier targets to the entry team. It is recommended to neutralize the sniper in the shack attached to the City Hall should a team go through the north path. Failing to do so will result in said sniper, as well as the sniper in the 2 floor shack getting overlapping fields of fire over the team. Since, compared to other missions, the extraction zone is at a different location than the insertion zone, it is important to clear out the area close to it before bringing the hostages. This means clearing the small house close to it, and setting up a perimeter around it before giving the go to the teams escorting the hostages.

SWITZERLAND (United News International) - A tense stand-off at an exclusive ski resort in Switzerland ended this evening. Swiss police moved into the village of Lamoura, where terrorists were holding hostage several delegates to the IMF meeting currently going on in Geneva. After a fierce firefight, they were able to subdue the hostage-takers. Police in Lamoura will neither confirm nor deny reports that several of the hostages are still missing. "We are confident this operation has been brought to a successful close, though we regret the loss of life incurred," said police spokesman Henri Schulz. "It is extremely regrettable that these events occurred."

The delegates were in Lamoura for a day's skiing holiday while taking a break from the IMF summit, an event which has been marked by some massive, but thus-far non-violent protests. IMF spokesman Oliver Clayton called the incident "extremely embarrassing" and promised beefed-up security for the remainder of the conference. 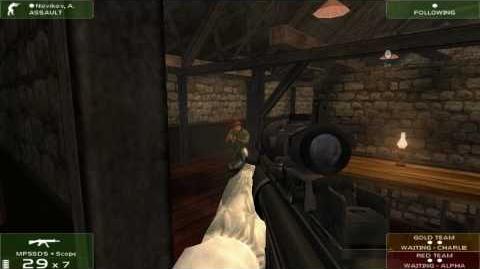