watch 02:34
Wiki Targeted (Games)
Do you like this video?
Play Sound
For the remake in Shadow Vanguard, see Operation Cold Thunder (Shadow Vanguard).

Cold Thunder is the second mission in the Tom Clancy's Rainbow Six. Its multiplayer counterpart is Congo Mansion.

It was introduced to Tom Clancy's Rainbow Six 3: Raven Shield as a custom mission in the Iron Wrath expansion.

Hutu Rebels have captured a research outpost in Congo run by the Horizon Corporation, and are holding Dr. Catherine Winston hostage.

John Clark - You made quite an impression on the Belgians during that embassy takedown - they're insisting that we handle this situation in the Congo. Horizon is the darling of the biotech industry - wildly profitable, with a strong activist streak. I'll let their CEO, John Brightling, fill you in on their activities in Africa. The bottom line for us is that the leader of their research team is a VIP named Catherine Winston. High-ranking friends at NIH, WHO, dinners at the white house - you get the idea. It's absolutely essential that if you get anyone out that it's her.

John Brightling - We're not in the Congo to turn a profit. We're there at the request of the World Health Organization to see if we can come up with a cure for the epidemic that's been decimating West Africa's cattle population. You have to understand: Horizon doesnt exist to make money. Horizon exists to make a better future. If people think we're crazy, well, that's their problem.

This is RAINBOW's second official mission. NATO is insisting that Rainbow take care of this situation. Horizon is the darling of the biotech industry, wildly profitable with a strong activist streak. The leader of their research team is a VIP named Dr. Catherine Winston. It is absolutely essential that she must be rescued.

The Rebels that have gained control of the outpost call themselves the "Hutu" Rebels, that have been at war with the Tutsis for decades.

Rainbow's objective is to neutralize the terrorists or rescue Dr. Catherine Winston by escorting her to the extraction zone. However, on veteran or elite difficulty, RAINBOW must rescue another unnamed male scientist hostage. Dr. Winston and the other hostage are in separate rooms, each guarded by one terrorist. The loading screen consists of two operatives outside the rebel camp If the player successfully completes the mission, an image of RAINBOW operatives surrounding Dr. Winston and the other scientist outside the outpost appears. If the player fails the mission, and image of a Hutu rebel standing above the bodies of RAINBOW operatives and a fellow rebel appears.

The Hutu terrorist forces aren't too bright, you can sneak in behind them without having a clue of what's about to happen. However, you should avoid frontal encounters with the rebels. The key is to act fast, move into the main building without being spotted, swiftly enter the rooms and put down any rebel you might encounter. Dr. Catherine Winston is being held hostage on the first floor of the building accompanied by two insurgents, be sure to spot the insurgents in time before they kill Dr. Winston. On veteran or elite, another hostage is being held in a basement that can easily be accessed in the front of the house. It is difficult to rescue this hostage without being detected on the outside of the outpost, since terrorists often patrol the front of it. The higher the difficulty, the more enemies there are. It is advised that the player should sneak behind the outside patrols and only kill any rebel that spots them (silenced weapons are suggested). The operatives should secure the hostage(s) and then either proceed to kill every rebel after confirming the hostage(s) safety or escorting the hostage(s) to the extraction zone.

KINSHASA, DEMOCRATIC REPUBLIC OF CONGO (United News International) - Hutu rebels have released a group of United Nations aid workers whose research station was overrun during fighting between the rebels and government forces. According to a spokesman from the American embassy in Kinshasa, the researchers have returned safely to the capital and will leave the country as soon as transportation can be arranged. Although the names of the workers have not been made available, the group is known to include both American and European nationals.

This peaceful resolution brings to an end almost a week of tense negotiations between the government and the rebels. Fighting in the countryside around the city of Kisangani has escalated recently as a result of the extended famine that has struck the Congo River basin. The freed UN researchers had been studying the roots of this famine before they were captured.

Mission Failure
Add a photo to this gallery

Hutu rebel
Add a photo to this gallery 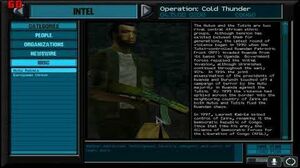