Operation Copper King is the third mission in the Black Thorn expansion of Tom Clancy's Rainbow Six: Rogue Spear. The multiplayer version of the level is African Village.

Terrorists have crossed into the town of Loyada in Djibouti and captured a school bus full of passengers. You must stop the terrorists without any casualties among the hostages. Your mission is to prevent the buss from crossing the border.

John Clark - This mission requires absolute stealth, followed by quick, decisive action. The terrorists must be stopped before they can get the bus into Somalian territory. Once it crosses over, it's going to be impossible to get it back without a major international incident. Reports indicate that the hostages have been tied up in the back of the vehicle. We're also told that only one of the terrorists is on board driving the bus and there appear to be others in the surrounding area are running interference.

Kevin Sweeney - We're starting to get a picture of what's going on here. We strongly believed the current situation to be a recreation of a historic rescue made in Djibouti by the French. Coincidence? I doubt it. We don't have hard evidence to back up our 'Copycat' theory, but it seems to fit the available data, and if so that means we'll be dealing with another aspect of the same terrorist organization.

If the terrorists successfully get the bus into Somalia, the risk to the hostage's lives will be greatly increased. We don't want to start a border war over this one, so you're going to have to move fast. And just to make things more interesting, the hostage-takers are demanding, not money this time, but weapons. If the government of Djibouti gives in, odds are that they'll see those guns in guerrilla's hands, and we'll see them the next time our Copycat hits.

Intelligence reports there is a single terrorist and an unknown number of hostages on board the bus. You will be inserted at the edge of town and must make your way to a good lookout position on the bell tower, located on the map. Some hostiles may be encountered along the way. Because the terrorists are all using radios, the bus will leave as soon as a member of your team is spotted. Stealth is key to this mission. Once the lookout position has been reached, stop the bus by taking out the terrorists on board.

LOYADA, DJIBOUTI (United News International) - A potentially dangerous international incident was averted today, as specially trained units under the direction of a United Nations peacekeeping force were able to regain control of a hijacked school bus headed for the Somali border. The bus was seized in the town of Loyoda with an unknown number of passengers on board. It was immediately turned toward Somali territory, but was intercepted approximately a mile from its destination. A fierce firefight ensured, during which all of the terrorists were killed. A last-ditch attempt was made to seized the vehicle, but the UN troops were able to hold off the assault and ensure the safety of both the bus and its passengers. The Somali government has issued a statement disavowing all knowledge of the incident, blaming it on "radical separatists with no ties to the legitimate government of Somalia."
The government of Djibouti had no comment. 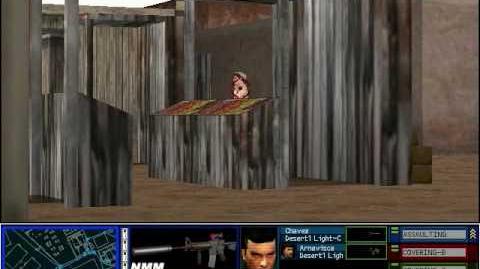