Operation Crystal Ark is the sixth mission in the Tom Clancy's Rainbow Six: Rogue Spear. The multiplayer version of the level is Chalet (Fall).

An anonymous informant has revealed the location of Vezirzade's dacha in the Caucasus. Your mission is to infiltrate the area, plant surveillance devices within the building, and escape undetected.

John Clark - We've had a lucky break. Apparently that hijacking was the last straw - one of Vezirzade's "business associates" has come forward. He'll only talk under conditions of absolute anonymity, but everything he's told us so far checks out six ways to Sunday.

He's given us the location of one of Vezirzade's country houses. It's a favorite meeting place for the principles in his "terror network". If we can get a bug in there we may be able to predict where he's going to strike next.

By the way, the decision from the higher ups is to keep the Georgian government in the dark about this. Vezirzade's has too many friends in high places. If you get caught, NATO will deny that RAINBOW even exists.

Anonymous informant - To you I am speaking because with this airplane matter it is clear now that Samed is...how to say...out of control. In Russia I am businessman...entrepreneur. Killing airplane passengers is not good business. It is madness.

His dacha is near the Black Sea, but he is not often there. He is moving, here and there, always. But his men are there and they talk, make plans. Perhaps you will hear something to help you, mmm?

In return for this information I want nothing. Please understand, I am not stool-pigeon. I am merely, as I said, a businessman...and a patriot.

This is a pure recon mission. USE OF DEADLY FORCE IS NOT SANCTIONED ON THIS OPERATION. If Vezirzade's guards detect you while you are in the house or on its grounds the mission will be a failure. You will need to disable the security system in the guardhouse before entering the main house or the security alarm will be triggered. Check your map for the locations where the two bugs are to be placed. Any of your operatives can plant the devices. 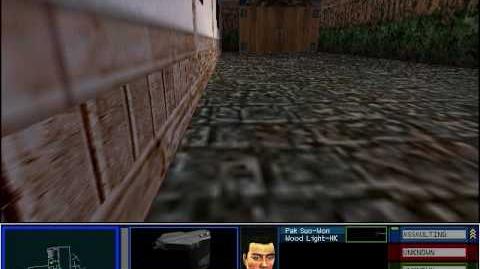