Operation Dagger Harness is the third mission of the Iron Wrath expansion for Tom Clancy's Rainbow Six 3: Raven Shield. The custom mission name of the map is Training Camp.

An old industrial site outside of Mirola, Poland has been used as a secret terrorist training ground for a while. It seems that these terrorists have also captured three nuclear scientists for unknown reasons. Rainbow has to stop these terrorists and rescue the scientists that are being held hostage.

Intel has determined the site of a terrorist training facility in Mirola, Poland. Three kidnapped nuclear scientists are being held there for reasons unknown. Your mission is to infiltrate the complex and rescue the scientists. Eliminate any terrorists who attempt to stop you.

John Clark - We've tracked the movements of several of the terrorists you took down at Kozloduy. They've all been through Poland recently, more specifically near Mirola. That's where Recon has ID'ed what looks to be a training camp. The setup they've got there is ingenious. It looks harmless from the air, which is why we didn't pick it up before, but it's got all the basic facilities anyone would need to turn out solid field-level operatives. And from what we can see, they've been doing exactly that.

The Polish authorities were going to shut it down, but since so many of the camp's graduates have been working outside Polish borders, arguments over jurisdiction dropped it into our laps. That's fine by me, of course. We know where these terrorists are going once they're trained. What we don't know, however, is who's running the camp or whom they're running it for. That's part of your objective as well. Find the man who's in charge of this operation and take him into custody. Intel has a long list of questions they want to ask him.

Kevin Sweeney - I'm pleased to announce that the inventory on the nuclear stockpile at Kozloduy is complete, and everything checks out. Every last speck of U-235, yellowcake, and anything else even vaguely radioactive is accounted for, locked down, and packed up for transport.

That being said, we can't make the same pronouncement for the personnel at the site, or at several of the other Bulgarian nuclear facilities. We've been doing a very quiet head count of late. The incident at Kozloduy could not have been done without inside assistance, and we wanted to put a finger on the likely suspects. Instead, we found something a great deal more disturbing: a number of scientists and engineers with nuclear expertise have gone missing. We don't know if they disappeared voluntarily or otherwise, but they need to be found before something happens.

That being said, we have reason to believe that several of these scientists are being held at a terrorist training site in Mirola, Poland. Satellite reconnaissance has indicated that it's a fairly sizable encampment with extensive instructional facilities. Clearly this isn't a one-time operation, and as such, it needs to be shut down. I'm sure there's valuable intelligence that we can glean from the wreckage, once you do your usual efficient job of neutralizing the unpleasant elements who are currently operating there.

Your mission is to liberate the three kidnapped nuclear scientists. The hostages are being held in the three different places marked on your map and are under heavy guard. Be aware that the more you will get close to the center of the camp, the more you will be vulnerable to attacks from all directions.

POLAND (United News International) - This sleepy Polish city was shaken today by news that an old industrial site outside of town was in fact used as a terrorist training facility. "That sort of thing doesn't happen here," said local resident Wladislaw Sienkewicz. "Maybe another country, but not here."

Polish authorities had long been monitoring the suspected terrorist site, and in the late afternoon hours, moved in. Members of elite units assaulted the camp from several sides and the barking of gunfire was heard for almost an hour.

"The operation was an unqualified success," reported Maj. Maciej Cenczyk. "We are very happy to report that the entire operation can be considered to be shut down, and that none of the terrorists escaped." Major Cenczyk refused to comment on potential links to other terrorist groups, saying only that the encampment is still providing "a great deal of useless evidence." 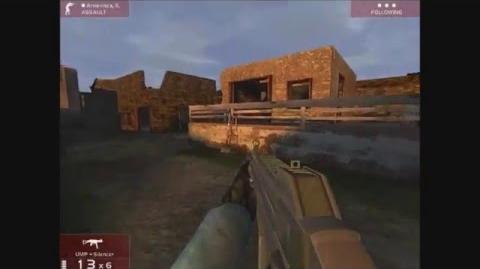