Horizon Corporation's central computer is located in its headquarters in downtown San Francisco. Your mission is to infiltrate this building, tap into their system, and extract all information about the activities of the Phoenix Group.

John Clark - We've got the goods on Anne. Last night we taped her on the phone with John Brightling. Apparently they've been conspiring since the 70's. He's been secretly bankrolling Phoenix while she went underground to run political interference.

The modified Brahma virus is scheduled to be released in four days. We still don't know where or why, but Brightling obviously expects it to produce the pandemic that Catherine predicted.

Anne left this morning for Brazil -- ostensibly to tour several Rainforest 2000 installations, but more likely to go underground before the pandemic starts. We'll deal with her later -- first we need to find out exactly what's locked up in Horizon's central database.

Horizon Corporation has been linked to the Phoenix Group. Horizon's central computer system is believed to contain information about Phoenix's plans to release the Ebola Brahma virus.

The computer system is located at Horizon's headquarters in downtown San Francisco. Access is provided through a terminal in John Brightling's office on the top floor. In order to escape detection, the team must first disable the security cameras in the control room on the floor below. Armed guards patrol both areas.

You will be inserted by helicopter on the roof and extracted the same way. The team must enter and leave the building completely undetected for useful intelligence to be gathered.

USE OF DEADLY FORCE IS NOT SANCTIONED ON THIS MISSION.

RAINBOW has uncovered evidence linking Anne Lang with a plan to release the Brahma pathogen into the general population. John Brightling, CEO of the Horizon Corporation, has also been implicated in the same plot. Background checks have revealed that Land and Brightling attended Cornell University at the same time during the late 1960's and were members of the same student organizations. It seems likely that they have been conspiring together as far back as the 1970's. Horizon Corporation is an ideal front for clandestine biological warfare experiments, and Lang has maneuvered herself into a position in the U.S. government that has allowed her to funnel research funds into Horizon and shield them from unwanted scrutiny.

The American arm of the Phoenix Group now appears to have been operating under the direction of John Brightling. Even Horizon's charity work with the inner-city homeless seems to have been front for kidnapping ring to acquire experimental subjects for testing the Brahma pathogen.

RAINBOW intelligence has revealed that Phoenix Group operatives have infiltrated Global Security. At this time the extent to which the company has been compromised is unknown. Global employees are providing security services for Horizon Corporation at dozens of different installations around the world, including some (such as the Horizon Ark) which are almost certainly carrying out the Phoenix agenda. Global is also responsible for providing security at the Sydney games, which have been identified as the target of the Brahma pathogen. It must be assumed that Phoenix Group members acting as Global Security agents will carry out the release of the virus. 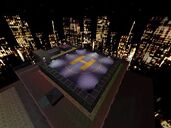