An unknown terrorist group has taken over the Japanese Embassy in Caracas, Venezuela during a party being held for visiting Japanese dignitaries. Your mission is to subdue the terrorists and rescue all of the hostages.

John Clark - Welcome back to the field, though I wish it were under better circumstances. The situation here is delicate. Neither the Venezuelan nor the Japanese government wants the other to handle it solo, so they've agreed to let RAINBOW take it on, instead.

The terrorists have separated the hostages into 2 groups. It's important to take out the terrorists guarding both groups at the same time, so that they won't be able to alert each other. These hostages are all prominent political leaders, so be careful. Losing any one of them would cause all sorts of trouble.

Kevin Sweeney - The requests we've gotten have been fairly standard ones. They want money, a flight out, and the release of a handful of political prisoners whom both countries have a problem turning loose. To tell you the truth, this mission reminds me of the operation at the Japanese embassy in Peru back in ‘97, when the site was held for four months. With luck, this will be resolved a lot faster than that.

The Embassy is a two-floor building with a basement and an enclosed backyard garden. Terrorists are holding hostages in the basement and the Japanese Ambassador is being held separately on the first floor. Their locations are marked on the map. Because of the potential repercussions of this matter, it will be especially important not to alert the terrorists.

CARACAS, VENEZUELA (United News International) - A tense situation in Caracas has been resolved happily, as a team of Venezuelan troops stormed the Japanese embassy and freed hostages taken two days previously. No known terrorist group has claimed responsibility for the attack, which ended at 6:14 this morning is a crackle of gunfire. The Japanese and Venezuelan governments have issued a joint statement praising one another's cooperation and efforts, and vowing that the incident will not hinder efforts at cooperation between the two countries. 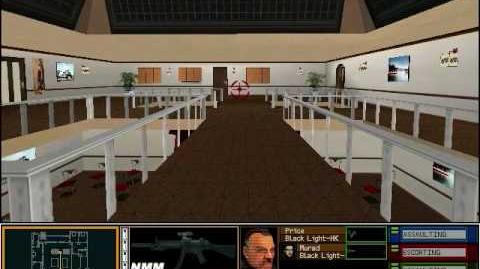