Edit
watch 02:59
Metroid Dread - The Loop
Do you like this video?
Play Sound
Not to be confused with the map from Iron Wrath, Storage Facility.

Operation Diamond Edge is the ninth mission in Tom Clancy's Rainbow Six: Rogue Spear. The multiplayer version of the level is Storage Facility.

Nuclear weapons grade plutonium has been recovered during a RAINBOW interdiction operation in St. Petersburg. The material has been traced to a weapons storage facility near Murmansk. Your mission is to raid the facility and take control of any remaining fissile material.

The installation the material came from is a storage facility for tactical warheads used by the Russian navy. It's run by a Colonel Viktor Rudenko - who until yesterday had a perfect service record. The Kremlin publicly admits nothing, but privately they're extremely embarrassed. They've agreed to let RAINBOW shut Rudenko's operation down - that's how little confidence they have in their own forces. Be sure to bring the good colonel out alive - we'll want him for questioning.

Susan Holt - We've been afraid something like this would happen for a long time. The Russian military is coming apart at the seams. Some units haven't been paid for over a year. It was only a matter of time before there was a major security breach.

The Kremlin is taking a huge gamble in using RAINBOW for this operation. The only people who know about this are the president and a few of his closest aides. If this operation is botched, it'll bring down the government.

Your objective is to locate the Colonel and escort him back to the extraction zone. If the alarm is raised Rudenko and his bodyguards will try to escape by car - keep all the escape routes covered. Be aware that the guards at the front gate can contact the main complex by telephone.

The following terms are used by the U.S. Defense Department to identify different classes of incidents involving nuclear weapons:

FARED GIANT - An accident involving a nuclear reactor or other non-explosive device.

ROGUE SPEAR - Possession of a nuclear weapon by non-governmental power. 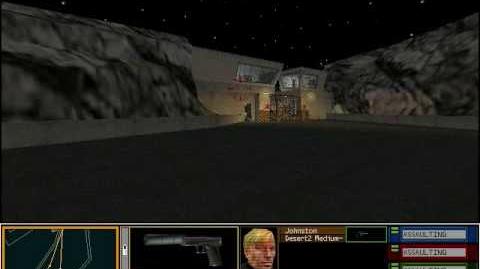