Terrorists from Red Sun Brigade have occupied the Senate wing of the U.S. Capitol. Two hostages, including a U.S. Senator,are being held in the main Senate chamber. The terrorists have also planted a bomb in the Senate offices. Your mission is to defuse the bomb and extract the hostages with minimal losses.

John Clark - These guys are Cold War throwbacks - genuine international communists. It seems the FBI stopped their ringleader on the New Jersey Turnpike last week hauling enough explosives to take out a couple of city blocks. He's in jail awaiting trial and they want him out. We're going to make sure that he stays right where he is for good long time.

James Dolan - The Red Sun Brigade has been making trouble for the Japanese since the 1970's, but they only got the funding to go international a few years ago. We've been tracking their movements for the last few months and it looked like they were prepping for something more covert - most likely a bomb detonation in the New York City area. We never thought they had the firepower to pull off an assault like this.

The Red Sun Brigade posed as tourists to get by security at the Capital Building. Once inside they killed a security officer and secured hostages along with a cache of weapons. Police managed to clear the building and have blocked off exits. Recon says that there is a bomb in the building that is remotely controlled by one of the terrorists. Defuse the bomb first before you approach the Senate Chamber or he will set it off. 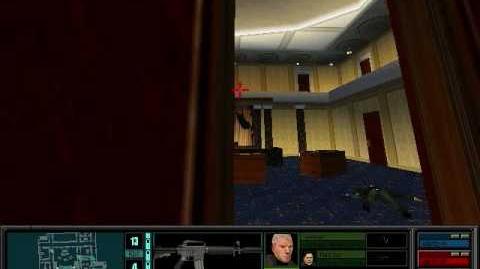