Operation Ebony Horse is the seventeenth mission in Tom Clancy's Rainbow Six: Rogue Spear. The multiplayer version of the level is Castle.

Upon interrogation one of Vezirzade's men has revealed the location of his base of operations in Azerbaijan. Your mission is to raid this stronghold, take Vezirzade into custody, and destroy the heart of his terrorist organization.

John Clark - Good work in Moscow... talk about the nick of time. The devices have both been disarmed. Their yields were in the 100-kiloton range - definitely powerful enough to flatten a city.

The Azeri government has been the writing on the wall, and has already washed its hands of Vezirzade. We've been given the mandate to go in and flush him out. His stronghold is a 400-year-old Persian fortress in the hills near the Caspian Sea. His guards are well trained, well armed and fanatically loyal. They won't give up without a bitter fight. Our orders are to take Vezirzade alive, but I doubt he'll give you that option.

Vezirzade has made a few modifications to the original Persian fortress, His private quarters are in the bunker cut deep into the mountain behind the old fortifications - that's where you'll find him hiding. His guards are well-armed and fanatically loyal - expect them to defend the stronghold to the last man. 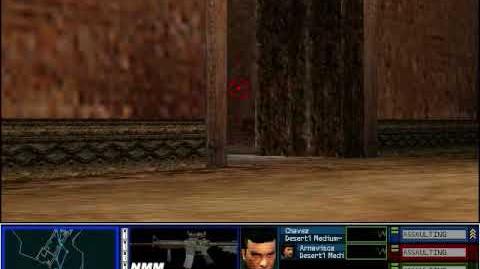