Operation Empty Cloud is the ninth mission in the Black Thorn expansion of Tom Clancy's Rainbow Six: Rogue Spear. The multiplayer version of the level is Convention Center.

Intel projections indicate that Newcastle's mercenaries planned to capture American athletes during the 2004 Summer Games in Athens, Greece. Olympics security forces were informed of the attempt and were able to prepare for the assault. While this allowed them to keep the athletes safe, the terrorists discovered the trap and took security personnel hostage instead. They then retreated to the Convention Center next to the Olympic village. Your mission is to rescue the hostages and neutralize Newcastle himself. It would seem he is personally taking part in this operation.

John Clark - Rescuing Secretary-General Cameron was more successful than we had hoped. While being held by the terrorists, Lord Cameron was able to overhear a couple of details of their next move. Furthermore, he was able to confirm that Newcastle did in fact take part in the kidnapping. Intel was able to piece together what Cameron overheard with Newcastle's modus operandi, and come up with a logical projection of what he was going to do next. We guessed Munich, 1972, and we were right.

Anticipating Newcastle's plan to take athletes hostage in Athens, we had started to set up the Olympic Village as an ambush. Unfortunately, site security surprised the terrorists before we were ready. Newcastle and his men took security personnel prisoner, then fell back and locked themselves in the closest building, the Convention Center. We now have a situation in which the terrorists are trapped in the Convention Center with an unknown number of hostages. Because of Rainbow's record and experience in dealing with Newcastle's group, we've been asked to neutralize him and rescue the hostages. This mission will take exceptional teamwork and absolute precision. We need to stop Newcastle for good, and this is the best chance we're going to get.

Kevin Sweeney - The good news is that only Olympic security was involved in the firefight. The bad news is that two of them were killed, and an unknown number taken hostage.

Newcastle himself is in on this one, which makes things a little more difficult. His record with SAS was dirty, but what he did, he did very well. The guy is sharp, fast and good, and he knows how to place his people. Watch your back on this one. He's a sneaky son of a gun. We won't gen any better chance to take him down.

There are hostages scattered on all three floors, all of them extremely well guarded. You must clear every room to ensure the safety of the hostages. Once all three floors have been cleared, proceed to the Exhibition Hall. That's where the last hostages are being kept. Your teams cannot succeed unless they synchronize their attacks. If one team goes in to soon, Newcastle's people will be alerted and the hostages will most likely be executed. Also, keep an eye open for snipers. 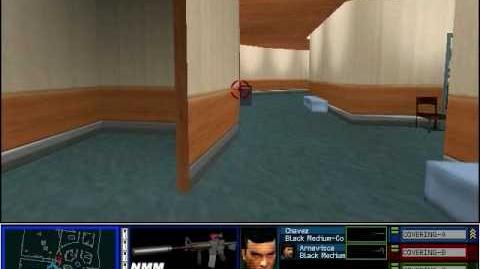