A joint American-British drug bust in Cayman Brac has failed, leaving several agents down and others taken hostage. The kidnappers have taken refuge within a private airport complex and are threatening to execute their hostages. Your mission is to rescue the captives and eliminate their captors.

John Clark - Pack your swim trunks, you're going to the Cayman Islands. Unfortunately, it's not a pleasure cruise. A joint drug intercept between the American DEA and British Customs went haywire at a private airport and since the defense of the Caymans is still under British control, we've been put on the spot.

The local police were smart enough to block off the runways so the terrorists can't take off. What that means in practical terms is that we have a squad of angry, heavily armed drug dealers somewhere in the airport complex itself. Even worse, they've got ticketing agents with them as hostages.

According to witness, someone or something must have tipped the smugglers off, because they were toting more ordnance than usual. When the DEA and Customs agents went to make their move, they got a nasty surprise.

Kevin Sweeney - Cayman Brac's the easternmost of the Cayman Islands. It's got a lot of money, a lot of big houses and a lot of people who like their privacy. The airport where the hostage-takers are holed up is small and private, with a short strip. Mostly it handles Gulfstreams and the like, wealthy people jetting in for the weekend. It's also a major drug distribution hub, mainly marijuana and cocaine, and the local police have made several busts there in the past. However, there's never been a hostage situation before. Don't kidnap the police was always one of the unwritten rules, but it seems that rule's been changed.

Your mission is to rescue the captives and eliminate their captors. The hostages have been separated. For a better chance of success, synchronize your attacks on rooms where hostages are being held. Recon has spotted a lone sniper outside, on the second floor of the terminal building. Since he is right beside the room containing a hostage, there's good chance a hostage will be executed if the sniper sees you.

CAYMAN ISLANDS (United News International) - A day-long stand-off between narco-terrorists and police came to dramatic conclusion on Cayman Brac, the easternmost of the three Cayman Islands. According to local reports, members of the British SAS successfully stormed the island's airfield and liberated all hostages. Among the captives were several local customs officials, taken prisoner after a shoot-out with suspected drug smugglers. "We are extremely grateful grateful to the men and women of the SAS who risked their lives today to rescue our citizens," said airport chief of operations Joseph McFayden. "This entire situation was a terrible shock to us." McFayden also promised increased security at the airport, and expressed a hope that "nothing like this would ever happen again." 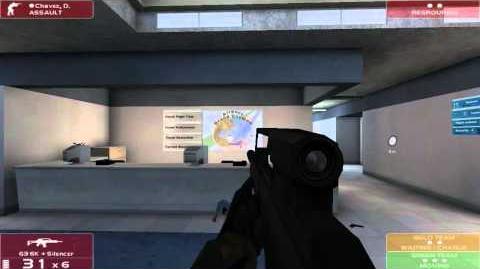