The multiplayer version of the map is called Docks.

Intelligence gathered from Vezirzade's dacha has revealed that criminal elements are illegally buying weapons from sources within the Russian Military. Another purchase is scheduled to take place tonight at dockside in St. Petersburg. Your mission is to prevent this exchange.

John Clark - Good work in London. They tell me you were the top-rated program on three continents.

This intel about the weapons exchange is our first payoff from those bugs you planted. Normally we wouldn't call out the cavalry over a few crates of hot AK-47s, but the way Vezirzade's men were talking, this delivery is something special. We can't let the Russian authorities in on this - there's no telling who's involved. Just like in Georgia - if you get caught you're on your own.

Susan Holt - The men making the buy work for a Russian gangster named Maxim Kutkin. He's a small timer who's made a name for himself by brokering arms deals for people like Vezirzade. I should add that he also happens to be Lukyan Barsukov's son-in-law. Barsukov runs the Moscow "authority" - the largest criminal operation in Russia. They call him the "Russian Godfather". With connections like Vezirzade and Barsukov, Kurtkin's star is definitely on the rise.

When the shooting starts the arms dealers will bolt like rabbits. You'll need to guard all the escape routes - both boat and car. Be careful. These guys are desperate - they won't hesitate to run you down if you get in their way. And remember: a few well-placed rounds to the tires or engine can totally disable a vehicle. 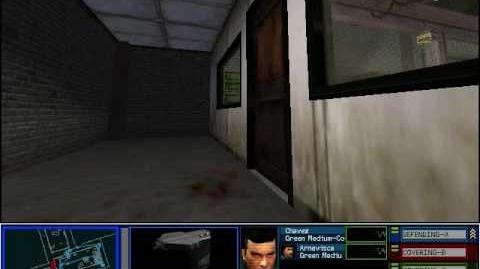 Russian Gangster's leader bodyguard
Add a photo to this gallery
Retrieved from "https://rainbowsix.fandom.com/wiki/Operation_Feral_Burn?oldid=64236"
Community content is available under CC-BY-SA unless otherwise noted.